Cease-fire is as cease-fire does 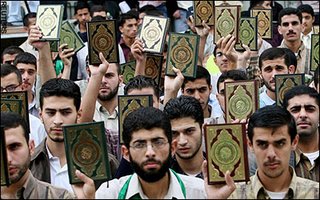 It is really a shame that the Daily Telegraph journalist, Tim Butcher, does not seem to have watched the MEMRI TV video of the Palestinian Prime Minister Isma’il Haniya speaking at a Ramadan rally. It seems to have been an interesting speech, even apart from the fainting spell in the middle of it. (Low sugar perhaps.)

There was a certain amount of boasting about the money Hamas was saving for the Palestinian people - $90 million, if we are to believe the PM – by not buying mobile phones or new cars for ministers and members of the Legislative Assembly.

All of that was greeted with deathly silence. Saving money? What has that to do with government? Surely, more will arrive from all those gormless Western governments and NGOs? And, in any case, a good deal of the savings seem to be on salaries that have not been paid for some time.

So Mr Haniya obviously decided to liven the audience up a bit and went into a rant about people being attacked, government undermined, Hamas being prevented from forming a government – all absolutely terrible, but it was all being done by Fatah, not Hamas.

In fact, the weeks of Ramadan have seen a good deal of fighting between the two groups in Gaza and the West Bank and not a few killings and woundings. In fact, several of the victims were teenage boys. So one would expect an international outcry and human rights organizations proclaiming the horror of it all, with, possibly, International Solidarity Movement protecting …. errm … one group against the other and, indeed, the other against one. I guess I must have blinked at the wrong moment.

There is, as Mr Haniya recognized, a strictly limited appeal in discussions of all that in-fighting, though quite a lot of appeal in the fighting itself. So, he went for the obvious punchlines: Israel must be destroyed; we shall never be part of a government that deals with Israel; we must have a Palestinian country on Palestinian land.

A certain lack of logic appeared there. On the one hand, Israel must be destroyed; on the other hand, the aim is the 1967 borders; then again, there was no Palestinian state before 1967. So what is the aim? Well, right now, it seems that the aim is to have another war with Israel, who is objecting rather strenuously and often militarily to what they say is a continued smuggling of guns into Gaza. And, of course, the only possible chance of creating anything resembling unity among the Palestinians is a war with Israel.