One's heart bleeds for the Grauniad 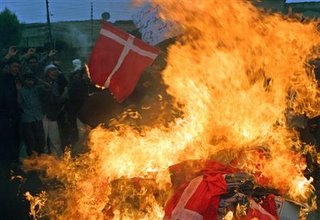 For various reasons this blog omitted to mention the fact that we have, in the last few days, celebrated, if that is the right word, the first anniversary of the Danish cartoons, one of the many events in the West that have caused “rage” in Muslim countries. Those people do live on a short fuse.

Now, thanks to The American Thinker, we find that there was an unexpected development as a result of those cartoons and the Guardian, for one, does not like it. Describing, not entirely accurately, the saga of what Luke Harding calls “a provocative exercise in free speech”, he comes to the conclusion that the people who had indulged in the provocation had not done all that badly out of it:

[Flemming] Rose [the cultural editor of Jyllands-Poste] makes a persuasive case that the paper did the right thing. It has still not apologised - and does not intend to, he said. In an article in the New York Times Rose argues that Europe's left is deceiving itself about immigration, integration and Islamic radicalism in the same way "young hippies" like him fooled themselves about Marxism and communism 30 years ago. "It's part of the Enlightenment tradition in the history of Europe and western civilisation to mock religious symbols. I think the debate we started was fruitful. We live in a state where there are basic democratic and constitutional values. And then you have immigrants with other value systems. How far do you go in accommodating these newcomers? What is a deal-breaker? The question of integration and assimilation is the number one issue facing Europe over the next decade."

While Danish milk products were dumped in the Middle East, fervent rightwing Americans started buying Bang & Olufsen stereos and Lego. In the first quarter of this year Denmark's exports to the US soared 17%. The British writer Christopher Hitchens organised a buy-Danish campaign. Among the thousands of emails sent to Rose was one from an American soldier serving in Iraq. "He told me he was sitting in Iraq, watching a game of football and drinking a can of Carlsberg," Rose said.

Rose is not the only person to have prospered from the crisis. Re-elected last year, Mr Rasmussen last week became Denmark's longest-serving Liberal prime minister. Danish troops are still in Iraq and Afghanistan. More than this, his sceptical line on immigration appears to have been vindicated as other EU countries follow suit.”

Well, there is the unfortunate aspect that Mr Rose has to have a permanent guard and the cartoonists still live in hiding, but, by and large, Denmark, deservedly, has triumphed. And, maybe, as Luke Harding insists, Danes have had to start paying more attention to Muslims who live in the country but, on the other hand, they have also made it clear that their own values are of overwhelming importance to them.