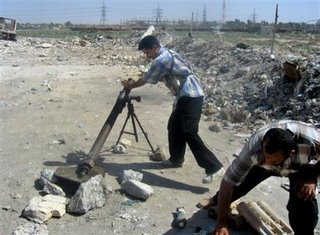 Last week, we reported that the Army was mounting a high-profile security operation in Basra, whence we suggested that we might also see an upsurge in the Iraq casualties.

It may only be a coincidence but the MoD reported today that a British soldier had been killed on Sunday and another seriously injured during an attack on a UK base in Basra, southern Iraq. According to a BBC report, the two soldiers were said to have been hit in an "indirect fire attack" at the Shatt Al-Arab Hotel after mortar bombs landed inside the base perimeter. The dead soldier was from the Royal Army Medical Corps, bringing the British death toll in Iraq to 119.

But there was also another possible coincidence. Omitted from both web and broadcast reports, however, was another salient piece of information. One of the 15 mortar rounds directed at the British actually missed its target and landed on a nearby home, killing two children and injuring a third. But then, we would not want anyone knowing that these murderous bastards are killing children, would we?