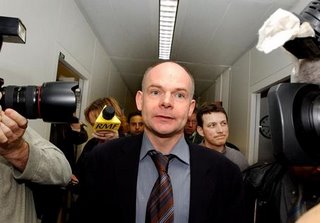 Two items on Danish June Movement MEP Jens Peter Bonde’s website seem to go together like horse and carriage. Well, sort of. He tells us that this coming Monday and Tuesday the European Parliament will be hosting a conference on “clean accounts” and members of various national parliaments have been invited. Mr Bonde makes various suggestions for urgent discussion, such as not giving any more money to the EU until at least one set of accounts is signed off by the European Court of Auditors and to ensure that full access is given to “all accounts for all controlling bodies”.

I wish Mr Bonde well but I suspect he knows that none of his suggestions are ever going to be put into effect. One has to admire his pertinacity, though.

The other item on Bondes Briefing for October 5 concerns the German journalist Hans-Martin Tillack who had committed the unpardonable crime of writing about corruption in Eurostat.

For that he has been smeared by past and present employees of OLAF, whose job, theoretically, is to deal with the waste and fraud in the Commission and related bodies. Instead, it would seem, they sent the Belgian police to raid Mr Tillack’s office. Said police, finding it much easier to deal with a German journalist than, let us say, Marc Dutroux, the paedophile murderer, confiscated Mr Tillack’s computer and various files.

Since then, we have had numerous legal cases with Mr Tillack trying to retrieve his files, trying to prevent OLAF from seeing them and trying to punish those who had slandered him with unsupported accusations of bribing OLAF officials. Despite support from some MEPs, the European Ombudsman, the International Federation of Journals and, above all, his own publication, the magazine Stern, he has lost every case.

So it has come again. The Court of First Instances has, as expected, decided against Mr Tillack.

"The court considers that there is not a sufficiently direct causal link between the forwarding of the information [that Mr Tillack bribed EU officials] by OLAF to the Belgian judicial authorities and the damage claimed in order for liability to be established on that basis," the Court of First Instance judgement stated.

The decision clears the way for the EU-anti fraud office, OLAF, to examine the reporter's contact books - currently in Belgian police hands - in its hunt for an internal leak that helped Mr Tillack break major stories about EU corruption back in 2002.

It is also set to discourage other people from bringing similar accusations against non-transparent forms of cooperation between the EU anti-fraud authorities and national police.

And it further clears OLAF of smearing the journalist's name with public bribery allegations between 2002 and 2004, in a judgment that Mr Tillack and the International Federation of Journalists see as a blow against press freedom and democracy in the heart of the European Union.

Of course, the case is not quite over yet. Mr Tillack may well appeal to the higher court in the European Union, the ECJ but that is unlikely to go against a decision given by the Court of First Instances. Or he and his magazine might go to the European Court of Human Rights, which might decide in his favour, after due consideration of, say, a decade. If that were to happen we might well see a scrap between the two European courts.