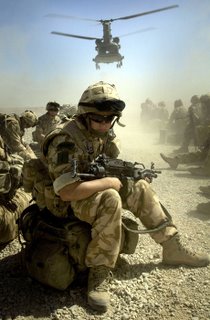 At first sight, it seems slightly odd that the Europhile Observer is the only newspaper to publicise a debate held by the "Eurosceptic" Open Europe, held last Tuesday at which Lord Inge held forth about Afghanistan.

Field Marshal Sir Peter Inge was Chief of the Defence Staff until 1997 and more recently on the Butler Committee which examined the use of intelligence during the Iraq War. And he has, we are told, "broken ranks" to launch an attack on the current military operations in Iraq and Afghanistan, warning that British forces risk defeat in Afghanistan.

The Observer claims that this is "one of the strongest interventions in the conduct of the War on Terror", with Inge also charging a lack of any “clear strategy” guiding British operations in Afghanistan and Iraq. It is, the paper also claims, the first criticism of operations by a former head of the British army.

It reflects, we are told by the Observer, the growing dismay among senior military officers and civil servants involved in defence and foreign affairs, that in the critical areas of Afghanistan and Iraq, Britain lacked clear foreign and defence policies separate from the US.

Inge is cited as declaring: "I don't believe we have a clear strategy in either Afghanistan or Iraq. I sense we've lost the ability to think strategically. Deep down inside me, I worry that the British army could risk operational failure if we're not careful in Afghanistan. We need to recognise the test that I think they could face there." 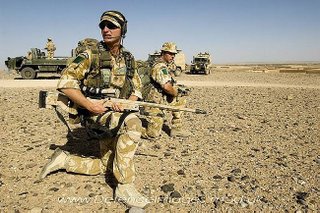 Inge is said to have claimed that Whitehall, "had surrendered its ability to think strategically" and that despite the immense pressures on the army, defence received neither the research nor funding it required. "I sense that Whitehall has lost the knack of putting together inter-departmental thinking about strategy. It talks about how we're going to do in Afghanistan, it doesn't really talk about strategy," he says.

There is no way that Inge could be described as a "bluff old soldier" speaking his mind, or even a "soldier's soldier" in the manner of General Sir Richard Dannatt. He is the epitome of a defence establishment figure and, therefore, his intervention in the debate is of some significance.

His views make an interesting contrast with those of Rudyard Griffiths, executive director of the Canadian Dominion Institute, who complains that the war in Afghanistan is being misunderstood.

Politicians and pundits opposed to the war, he says, are fixating on the idea that Afghanistan is the "Son of Iraq." They argue that Nato, like the US Army in Iraq, is incapable of defeating a counter-insurgency that has popular support and unlimited opium dollars. Ipso facto, "we should bring our troops home and redeploy the military where it is urgently needed, as peacekeepers in Darfur."

Albeit writing from a Canadian perspective, Griffiths makes points that have equal relevance to the British situation: Afghanistan isn't Iraq, he writes, and we draw this parallel at our peril. Most of Afghanistan is prospering and at peace. The south, where the fighting is taking place, is made up of a single ethnic and religious group, Sunni Pashtuns. There is simply no structural reason for Afghanistan to spiral into the kind of intractable sectarian violence that is fast derailing the US occupation of Iraq.

In this context, the goal – which is often misrepresented as "political and humanitarian" - can be defined more clearly as "no more and no less than" providing the Karzai government with a vestige of political oversight over the country's perennially rebellious south. Creating a more democratic and tolerant Afghan nation is the work of generations.

Griffiths offers a refreshing degree of clarity which is often lacking from the debate. Furthermore, his idea of a rationale for Nato's presence does seem to make sense. As we learn more about this issue, it becomes clearer that the southern provinces have always created a problem for the central government. Hence, the mere presence of Nato troops – extending the writ of the central government - perforce, is an achievement in itself.

It would, therefore, be helpful if our own government expressed our national objectives in Afghanistan rather more clearly than they have done to date. That way, we could ourselves understand whether those objectives were being achieved and whether the likes of Lord Inge are right to sound the alarm.

In that sense, Inge's admonishment's seems a little overwrought. Even at their most stretched, British troops are unlikely to be defeated militarily by the Taleban, and there also seems to be a better understanding that this is not a black-and-white issue - with questions being asked about the true nature of the enemy, and some re-thinking about how to defeat him.

There are also some indications from an interesting piece in the Mail on Sunday that HMG has not entirely lost its touch. The newspaper tells the tale of a "secret slush fund" of more than £1 million sent to Afghanistan to bribe local warlords being destroyed when the Special Forces aircraft carrying it burst into flames as it came in to land.

It appears that the cash - all in brand new American notes - was packed into two four-wheel-drive vehicles being carried on the RAF Hercules C-130 last May. However, as the aircraft approached the landing strip outside the town of Lashkar Gar, one engine erupted in flames and the blaze spread quickly – or so the official story goes 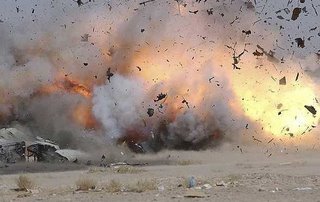 Anyhow, the pilot managed to touch down and all those on board - including the new British ambassador in Afghanistan, Stephen Evans, and a group of SAS troops – managed to escape with just seconds to spare. But it was too late to extinguish the inferno, and the Hercules was largely destroyed - along with the vehicles and cash. The Army had to be called in to finish the job, with the spectacular results pictured.

What this indicates though is that the time-honoured strategy of bribing tribesmen into loyalty is alive and active. But, for this to have a lasting effect, it is clear than British and other Nato troops must be kept in-place for the long-haul. The problem, as we see it, therefore, is the "home front", in that the low tolerance of casualties – in the broader context of the unpopularity of Blair’s military adventures - could force a premature withdrawal before anything worthwhile has been achieved. 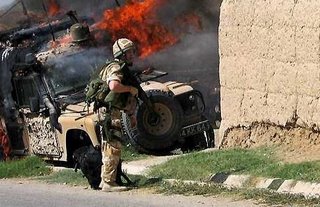 If the trigger thus becomes an unacceptable level of casualties, it would seem that the Nato forces can succeed – in the short-term at least – just by maintaining a presence and keeping casualties down to a (politically) tolerable level. And that points not necessarily to a need for more troops, but better equipment and support of those that are there. More troops, deployed on the same basis as currently, simply means more targets, more opportunities and more deaths – increasing pressure for withdrawal.

Viewed in that way, the idea of a small, well-protected force, increasingly working with the local population over the long term (with troops in place for 20 years or more) is far more attractive than the idea of committing larger numbers to an all-out war. One wonders, therefore, whether Dannatt and now Inge, are sending the right messages or whether, in this case, more – as in troops – actually equals less.