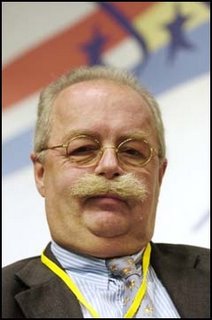 Christophe de Margerie, scion of the Tattinger dynasty, long-time employee of Total, affable bon viveur and highly regarded negotiator, especially in the Middle East, seems to have been everybody’s favourite oil businessman. Even today the Financial Times was extolling the virtues of this almost Poirot look-alike. (Poirot was a little daintier and dyed his moustache black.)

Mr de Margerie is regarded by analysts, investors and peers as one of the most competent men in the industry. The 55-year-old is the group’s “Mr Middle East”, famed for negotiating concessions in Iraq to exploit two big fields at Majnoun and Nahr ibn Oummar, though these were never signed.

He has helped Total win praise recently for doing well in areas, such as production growth, where others have suffered. The French group also avoided some of the staffing headaches that afflicted its rivals, as it did not lay off as many engineers after the wave of mergers in the late 1990s.

Total’s handling of how Mr de Margerie’s takes over from the much-admired Mr Desmarest has been seen as a model for the rest of the industry. Only ExxonMobil, the world’s biggest listed energy group, has had a recent succession go as smoothly.

But alas, there is a fly in the ointment. To quote the Financial Times again:

The corruption charges against Mr de Margerie for alleged involvement in kickbacks to Saddam Hussein’s regime in Iraq during the United Nations’ oil-for-food programme are the first black mark on what had been seen as one of the oil industry’s smoothest leadership handovers.

As another article in the Financial Times [subscription only, unfortunately] explains:

The incoming chief executive of Total, the French oil and gas group, has been charged by a Paris investigating judge with taking part in corrupt activities during the United Nations’ oil-for-food programme in Iraq.

Christophe de Margerie, Total’s head of exploration and production, was put in prison for 48 hours, questioned by judicial police and an investigative judge, before being charged with aiding and abetting corruption of foreign officials and misuse of company property.

He was released from custody on Thursday night. The surprise move cast a shadow over plans for Mr Margerie to replace Thierry Desmarest as chief executive when the latter steps up to non-executive chairman after the group’s annual results in February.

Bernard de Combret, another former Total executive, has also been placed under investigation, according to media reports, but this has not been verified by Total. M de Combret has left the company.

Rather nice to think that heads are finally going to roll over the oil-for-food scam. Well, some heads and I don’t suppose they will roll very far. I fully expect Christophe de Margerie to take up his position as the next CEO of Total.