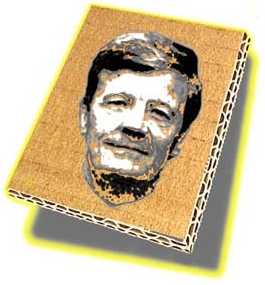 Paul Sykes, the "Eurosceptic Yorkshire multi-millionaire" is, we are told by a national newspaper, to lead a £10 million campaign to bring the UK's relationship with Europe back to the centre stage of British politics.

Its aim, is supposedly to break the "conspiracy of silence" over the transfer of vital powers from Westminster to Brussels and will begin next week with advertisements in daily newspapers, a website and a call centre. A mail-shot to every household in Britain is also planned.

Dubbed the "Speak Out" campaign, the declared aim is to "harness mass support for a referendum on repatriation of seven powers now transferred to Europe". Sykes, however, is insisting that this is not about withdrawing from the EU. He says: "This is an outbreak of the truth. Every man, woman and child will get to know what our relationship with the EU is."

We should be highly delighted at this development, but for the fact that we have seen it all before. Sykes has a habit of calling in people for discussions about how to develop Eurosceptic campaigns, ignoring their advice and then going ahead with what he first thought of – usually involving a mega-spend on ineffectual newspaper ads.

As for leading anything, Sykes is on his own. There is no mass campaign beyond the dining rooms of the ad agencies that he will be employing and his reach will last for as long as he stumps up cash which – from past experience – will not be for very long, before he loses interest.

We should not be too critical of the man though – it is his money. The pity is that he has, over term, wasted so much of it – and the time of the people he has consulted and then ignored.