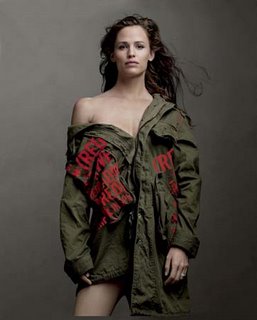 For various reasons I missed Gerard Baker’s very funny and very angry piece about the self-righteous campaign Gap (the store that will sell somewhat inferior goods for superior prices).

The company has joined forces with Bono and the Product Red campaign that has signed up some of the most blue chip of names such as American Express and Motorola. It is pledging to give half of the profits from its iconic red T-shirts and leather jackets to Aids/HIV relief. The campaign was launched here last week, with the always crucial imprimatur of Hollywood. It features stars such as Steven Spielberg and Penelope Cruz in red T-shirts with one-word messages that say, with a modesty that doesn’t fit quite as well as the clothes, INSPI(RED) and ADMI(RED).

That’s Bono of U2, incidentally, the group that has relocated its music publishing company to the Netherlands as the Irish government decided to stop tax allowances for “artists”. Far it be from me to decry good business practice that means you can halve your tax bill but it ill behoves the same people to scream abuse at Western governments for not handing over more tax money (that’s your money and mine, by the way) to a bunch of unaccountable, kleptocratic tyrants.

Gerard Baker goes through all the various arguments, mentioning inter alia that fifty years of aid have resulted in an Africa whose countries are considerably poorer than they had been when they became independent. This has now been accepted by such luminaries as Richard Downden of the Royal Africa Society.

The aid that has gone to Africa for over 40 years has long ago outstripped the Marshall aid that the West European countries received for 4 years (which was then repaid) with nothing but negative results. And, Mr Baker adds, the only thing that will help poor countries is free trade, that is people in the rich west buying the goods that is produced by the poor in the poor countries.

I am sick and TI(RED) of companies trying to demonstrate to me how seriously they take their supposed duty to bring joy to and remove pain from the world. They can take their charge card (S, CREW-necks and mobile phones and ask THEMSELVES) whether this is really the sort of thing they should be doing with their shareholders' money.

Now I don’t here intend to demean the charitable spirit or the work of good people such as Bono or Sir Bob Geldof, nor the perfectly decent motivation of millions in the wealthy world who genuinely want to help to improve the wretched lives of those less fortunate than themselves.

Don’t get me wrong; charity remains one of the finest of virtues and should, in almost all instances, be encouraged.

Nor am I going to point out the nauseating conspicuousness of the consumption represented by the RED campaign (“Look,” it says, “I not only look good. I AM good!”) Nor am I even going to dwell on the fact, though I could, that for all the aid Africa has received over the past 50 years, the continent remains poorer than ever, and certainly poorer than parts of the world that have received little in the way of charity in that time.

My problem here is with what this does for the very idea of capitalism, for companies pursuing their real and entirely wholesome responsibility of making money. Free market capitalism, untrammelled by marketing people in alliance with special interest groups on a mission to save the world, has done more to alleviate poverty than any well-intentioned anti-poverty campaign in the history of the globe.

By concentrating on selling quality, low-priced goods, some of them made with labour that would otherwise lie idle (and dying) in the developing world, Gap saves lives.

Well, it would do if the goods were low-priced but let that pass. I suspect they are lower priced in the States than here.

Gerard Baker is a little worried about the fact that companies like Gap actually uses its clout to campaign against capitalism, which cannot be a good thing either for the developed or the developing world.

However, Tim Worstall, takes a different view. In his opinion, the Gap campaign is nothing but capitalism, red in tooth and claw, at work.

That there are people out there so deluded as to refuse to purchase goods manufactured by the poor of the world, thus making said poor richer, is obviously true. So, create a new brand, which mollifies these people's (entirely misguided) concerns. Take the money off them and use it to purchase goods from the poor of the world and thus make said poor richer. …

In the standard business textbooks this would be a form of branding, of product differentiation, no different from the same companies making both cheap and expensive soap powders that are exactly the same except for their packaging. Consumers get an increase in their utility by buying something that more accords with their self-image of themselves, companies get greater profits because they are able to price discriminate between those with those different self-images.

There is much to be said for Mr Worstall’s point of view. Gap is not going to be the loser by that campaign. Whether the people of sub-Saharan Africa gain anything by it is, at least, open to discussion.