For the times they are a-changin' 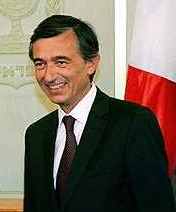 Thanks to a posting on The American Thinker, we find out that there are some changes of opinion at the highest level in France. Well, if you can consider Philippe Douste-Blazy, the Foreign Minister to be on the highest level.

According to the European Jewish Press, M Douste-Blazy has said that he has changed his opinion about the barrier Israel has built to prevent suicide/homicide bombers from entering the country. France, let us recall, has always criticized the “wall” and welcomed the 2004 UN Resolution that demanded its dismantlement. Now, the Foreign Minister thinks differently and for a very good reason:

“I have significantly evolved on the matter of the separation fence” said Douste-Blazy on French Jewish television TFJ on Thursday. “Although the wall was a moral and ethical problem for me, when I realised terror attacks were reduced by 80 percent in the areas where the wall was erected, I understood I didn’t have the right to think that way.”

This statement meant that others in the government have had to clarify their positions:

“The question, for us, concerns the route of the fence rather than its mere existence,” said Foreign Ministry spokesman Jean-Baptiste Mattei on Friday. “We recognise, of course, Israel’s right to defend itself from terror, but the route of the separation fence must not overlap Palestinian territory and prejudge the final solution.”

One can’t help feeling that the last phrase there is a little unfortunate but M Mattei is trying hard.

The suggestion by The American Thinker poster that the French government might be thinking of erecting their own fences around some of the banlieux may well be accurate but the action would be unnecessary. The people who live in those horrible developments are already isolated effectively from the rest of the country. A much better solution would be a few changes in the economic structure that would allow those people to get jobs.