The most likely person wins 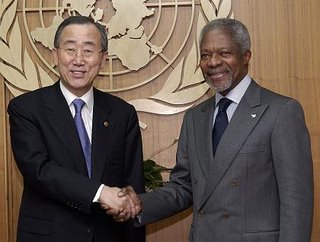 When explanations are given in old-fashioned detective stories, one often finds the likes of Miss Marple saying primly that well, of course, in books it is the least likely person who might be the culprit but in real life it is the most likely one (usually the husband or wife or heir to the money) who is probably guilty. And so it is with the next SecGen of the United Nations: the South Korean Foreign Minister Ban Ki-moon was always the most likely candidate. On Monday he was officially nominated by the Security Council and will, without doubt, be endorsed by the General Assembly.

As the decision (by acclamation) on Ban was taken just before a special meeting to discuss what if anything is happening in North Korea and what if anything can be done about it, John Bolton was given a superb opportunity to make some political capital:

It's really quite an appropriate juxtaposition that today, 61 years after the temporary division of the Korean Peninsula at the end of World War II, that we're electing a foreign minister of South Korea secretary general of this organization and meeting, as well, to consider the testing by the North Koreans of a nuclear device.

Yes, indeed. What would have happened if the Soviet Union had not been in a huff in 1950 and the UN would not have authorized military protection of South Korea against the aggressive North?