Get some professionals in 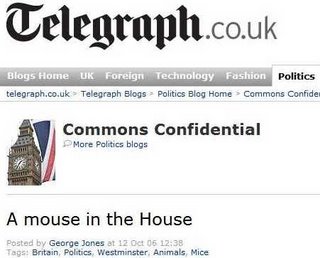 Over on Purple Scorpion is an interesting commentary on one of the latest developments in the long-running sage of the REACH directive. It is one of several pieces on the general issue of EU regulation, a theme also developed by Tim Worstall, with some interesting comments on his post.

Taking in our posts on the subject (here and here) this means that the blogosphere is making the running on a crucial issue which, so far, has had only very limited exposure in the MSM.

On an entirely unrelated issue, the blog Winds of change points up a study from a Canadian military think tank. This is on the fascinating subject of blast-resistant vehicles, written in such a way as to be accessible to the non-technical reader and thereby illustrating the broader relevance of the issue.

If we had a halfway decent media, that is precisely the sort of thing we would be seeing in our newspapers and on television, and be hearing on the radio. But, instead, we get low-grade superficialities such as that which we reported earlier or the banal trivialities in which the media now seem to excel.