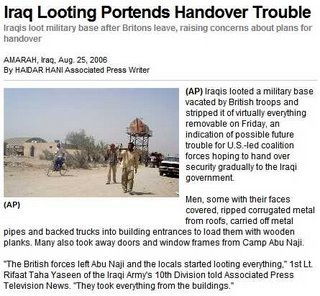 After the withdrawal of British troops from Al Amarah in late August and the humiliating sacking of their former base at Abu Naji, the situation has now deteriorated to such an extent that – according to BBC News – British troops are on stand-by to return.

This follows what has been described as "one of the boldest acts of defiance yet" by Shi'ite cleric Muqtada al-Sadr whose Mahdi Army supporters today seized control of the city.

It appears that fighting broke out on Thursday after the head of police intelligence in the surrounding province, a member of the rival Shiite Badr Brigade militia, was killed by a roadside bomb, prompting his family to kidnap the teenage brother of the local head of the Mahdi Army.

According to local reports, the Mahdi Army retaliated this morning, storming three main police stations and planting explosives that flattened the buildings. At least 15 people, including five militiamen, one policeman and two bystanders, have been killed. 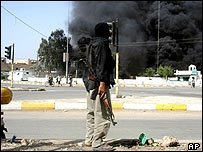 Through the day, about 800 black-clad militiamen with Kalashnikovs and RPG launchers have been patrolling city streets in commandeered police vehicles. Others have set up roadblocks on routes into the city and loudspeaker trucks have been circulating, telling residents to stay indoors.

Prime Minister Nouri al-Maliki has dispatched an emergency security delegation that included the Minister of State for Security Affairs and top officials from the Interior and Defence ministries. About 700 Iraqi troops have been sent to the city to deal with the violence, and a 500-strong British Army battle group has been put on standby. Major Charlie Burbridge, based in Basra, confirmed that British forces were already providing air surveillance. 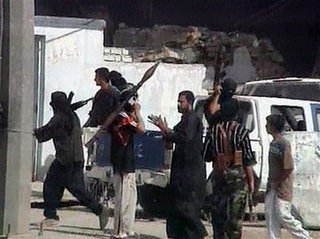 This could present a major setback for the British disengagement plan, as the idea that Iraqi security forces are capable of controlling Amarah is looking very shaky. If General Sir Richard Dannatt is relying on release of troops from the Iraqi theatre to make up numbers in Afghanistan, he could be in for a long wait.

UPDATE: Later reports indicate that the militiamen have withdrawn from the streets, following arrival of Iraqi soldiers and mediators. A temporary truce has been negotiated with an al-Sadr envoy. Maj. Burbridge claims that 600 Iraqi army soldiers have retaken control of the city. "They've applied a solution and at the moment it's holding," he said. "At the moment, it's tense but calm."