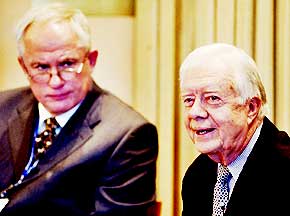 Although we were promised the Nobel Peace Prize today, it will not be announced till Friday. The day being also the 13th of the month, the runes are not particularly favourable. There are, it seems, 191 nominated candidates, individuals and organizations, though I bet they have not accepted our suggestion of the US Marine Corps.

Geir Lundestad, the Head of the Norwegian Nobel Institute, which awards the Peace Prize (the Swedes are not guilty in this case), has been musing on the subject. Anyone, according to him, who will bring peace to the Middle East will be in with a very good chance. Well, if that is what we have to wait for – bearing in mind that there is more to the Middle East than just the Israeli-Palestinian problem – there will be no Nobel Peace Prizes for some time to come. I wonder if there is a roll-over system with the prize money.

Mr Lundestad then went on musing:

The scope of the peace prize will continue to expand, after a ground-breaking environmental award in 2004, and journalists could be among new candidates in the future, Lundestad said.

He declined to hint at who will win this year from a field of 191 nominees but was clear about the importance of Middle East peacemaking. “We have given many prizes to the Middle East — We will definitely give another peace prize to those who are able to solve the Israeli-Palestinian issue,” Lundestad said.

Will the journalists who covered Qana be in the running for the Peace Prize? How will it compete with our own Green Helmet Prize? Did Mr Lundestad feel a twinge of irony when he talked about the many prizes that have been given to the Middle East? These are important questions.

We can be certain of one thing: the Americans may have swept the board with all the other prizes but they are unlikely to be awarded this one. Unless the egregious Jimmy Carter, probably the least successful or admirable president of the twentieth century, will be given a second one. He was given one in 2002

for his decades of untiring effort to find peaceful solutions to international conflicts, to advance democracy and human rights, and to promote economic and social development.