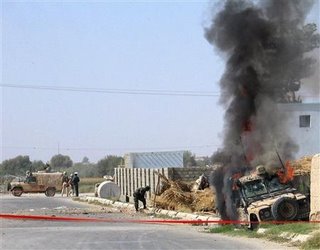 UPDATED: A Royal Marine from 45 Commando has been killed and another seriously injured after yet another suicide attack on a "Snatch" Land Rover in Afghanistan.

They were driving in a military convoy leaving the Afghan national police station at Lashkar Gar, capital of Helmand province, this morning. The marines were airlifted to a military hospital at Camp Bastion, where one later died from his injuries. An MoD spokesman said the dead soldier's next of kin had been contacted.

Ghulam Muhiddin, the spokesman for Helmand's governor, reported that the attacker targeted British soldiers. He said the bomber, who was on foot, also killed a boy and a girl, both under eight. Other reports speak of bodies of civilians, some with arms and legs blown off, scattered around the scene near the town's bazaar. 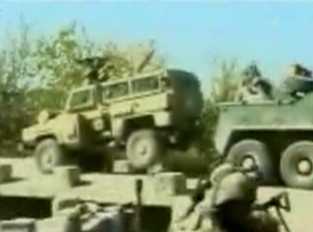 This is becoming an all too familiar scene and, while better-armoured vehicles do not provide complete protection – witness an incident earlier this month when a Canadian soldier lost his life after an attack on an RG-31 (pictured) – the overall experience is that troops are much more likely to survive, usually uninjured.

Apart from anything else, a "Snatch" Land Rover costs in the order of £60,000 and this – like others before it – is clearly a write-off, while RG-31s suffering similar attacks need only relatively minor repairs.

What is particularly disturbing though is that, while the replacement Pinzgauer "Vector" is no better protected than the Land Rover, already the MoD propaganda machine is moving in to tell the troops what a good piece of kit it is. 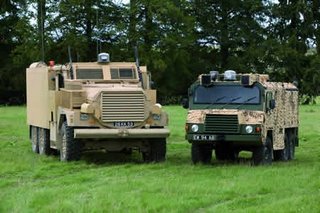 Thus we see in this month's Soldier Magazine a "Boys' Own" puff on the two new additions to the British order of battle, the tame hack gushing that the "meaty Mastiff" and Vector (pictured left) are "destined to make life safer for troops in Iraq and Afghanistan".

The Vector – so soldiers are told – "will address the protection and payload problems of the Snatch Land Rover, making it ideal for Afghanistan." Surpassing the carrying capability of the Snatch, the Vector can carry an additional specialist, such as an interpreter, plus enough water for a ten-hour patrol. The piece adds:

"With Vector we have an improved payload capability, better mobility and improved protection,” said the vehicle’s project manager, Ben Onslow. “It will also have air conditioning, which is important for comfort.” The first of approximately 170 vehicles ordered should be delivered by February – just ten months after Pinzgauer started work on the variant.

Minister for Defence Procurement Lord Drayson told reporters on Salisbury Plain: "The Snatch Land Rover will continue to be an important part of our equipment. But we have identified that we need to give commanders more options. It is vital that we give our soldiers the kit they need. But it is down to the commanders in the field to choose the right tool for the job."

You would expect a tame house magazine to deliver that sort of guff, but it would be nice if the supposedly independent media took time out to tell our soldiers the truth. Unfortunately, it would seem that hacks are more concerned with the threat of external censorship, without realising that self-censorship, ignorance and indifference are probably the greater dangers.