No, this was not a revolution, not even an uprising 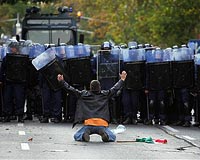 I had two communications from Budapest just after the riots were over. One, from a man whose political opinions I know well, said that the troubles were over and Orbán lost (as usual) and this was utterly predictable. The other, from someone who has strong anti-socialist feelings but is, perhaps, less involved in Hungarian life, said that this was just the beginning. Thousands of people demonstrated in Budapest and tens of thousands in the rest of the country. As it happens I have doubts about both communications but neither do I believe the government line that it is immensely popular with only a few fascist extremists opposing it.

If I have doubts about the government line, the Western media apparently does not, though finds it hard to understand what or where Hungary is. (I was amused to see Kate Connolly of the Daily Telegraph reporting about the riots from Bucharest. Wrong country, dear, though the two places do sound the same.)

Yesterday’s International Herald Tribune had an article that tried to sum up what has gone wrong with the various East European countries that so many hopes were attached to. Alas, the article did not seem to think that inappropriate tax and regulatory structures imposed on relatively weak economies and even weaker political systems could just result in problems. I have been saying this since 1998 and take no pleasure in seeing most of the predictions we made with Bill Jamieson at the time coming true.