For the times they are a-changin' - 2 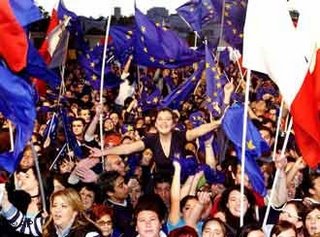 It has been the contention of this blog from the very beginning that the entry of the East European countries into the EU will have precious little effect on the economy of the Union and its member states. We have noted that certain optimists, such as Marian Tupy of Cato Institute are now coming round to the view that the supposedly radical agenda of the post-Communist states will collapse in the face of EU intransigence, not least because there are a great many former Communist apparatchiks in these countries who find negotiating in Brussels a delightful and heartrending experience. (More of Dr Tupy’s latest paper in another posting.)

On the other hand, it was clear that the march of the common foreign and security policy will slow down with the East Europeans inside the tent as their attitudes to the United States against whom the policy is being formulated and to Russia, France’s and Germany’s great friend, are likely to be different from those of the West Europeans.

One of the struggles we have watched with interest is the East Europeans' dogged insistence that the EU institutions, particularly the European Parliament, state categorically that Communism was on the par with Nazism as being one of the twin evil (I use the word advisedly) ideologies that murdered millions of people, tortured many millions more and destroyed whole countries and societies. It has not been easy, given the left-wing bias within most of these institutions and the rather narrow-minded and ignorant assumption by most people that nothing can be as bad as Nazism and, at least, Communism meant well.

The fiftieth anniversary of the Hungarian uprising was a good excuse and I was fully expecting a great deal of waffle about the evils of all political oppression, particularly nationalism.

Astonishingly, the European Parliament has come up with a reasonable press statement, actually mentioning Communism as one of the totalitarian systems. There is no reference to the nationalist side of the Hungarian uprising – its aim was national independence as well as personal liberty – but let that pass.

In adopting a resolution on the 50th anniversary of the 1956 Hungarian Revolution and its historical meaning for Europe, MEPs recognise the Hungarian Revolution of 1956 as one of the emblematic manifestations in the 20th century of the pursuit of liberty and democracy that defied Communism in the Soviet bloc.

The European Parliament salutes the brave men and women of Hungary who, by their self-sacrifice, gave a beacon of hope to other nations under the stranglehold of Communist rule. MEPs underline that the democratic community must unequivocally reject the repressive and undemocratic Communist ideology and uphold the principles of liberty, democracy, human rights and the rule of law, and take a clear stand whenever they are violated. The House calls on all democratic countries to clearly condemn the crimes committed by all totalitarian regimes.

Finally, MEPs call for the establishment of a European programme to strengthen cooperation between research and documentation centres in Member States studying the crimes of totalitarian regimes.

Of course, they will now have to find some reason for passing a resolution against nationalism, as we know, the root of all evil in the gospel of European integration.