Yesterday's headline in The Daily Mail with something similar in The Daily Express - but tomorrow's problem. In an attempt to cut down the amount of waste that finds its way into the nation's dustbins, local authorities are secretly fitting bins with microchips. Bins will be weighed on collection and households will be charged according to the amount of waste generated. 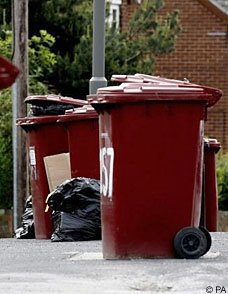 All this is to deal with EU law which requires the amount of waste which goes to landfill to be reduced, and the volume of recycling increased. The theory is that, if charges are levied on ordinary waste, people will be more inclined to recycle.

That is the theory. What these morons do not understand is that domestic waste collection in this country is first and foremost a public health issue. To that effect, collection became a statutory responsibility of local authorities by virtue of the Public Health Act 1875, introduced as a measure to help reduce diseases spread from flies and vermin.

Then and ever since, the collection has been funded out of the general rate (tax) for the very good reason that, if a direct charge was levied, some people would dispose of their waste in an insanitary manner. Apart from the public health implications, such fly-tipping is visually unappealing and costs of collection and disposal are high.

Between 1875 and now - over 130 years later - nothing has changed to gainsay the good sense of our forefathers, except that we are now members of the European Union, joined with countries which were not even nations when we devised our own rules. And now they're making laws telling us how to manage our affairs.