The beauties of blogging 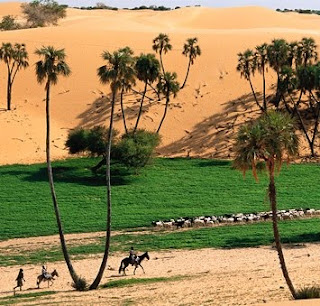 No sooner is the Africagate piece up then Bishop Hill comments on it. That brings up further comments which identify this article from the National Geographic News.

Confirming the observations of the Tunisian government in its "initial national communication" (where it suggested that rainfall might increase), the National Geographic article is headed: "Sahara Desert Greening Due to Climate Change?"

It states that, contrary to the picture painted of "desertification, drought, and despair" by the IPCC, emerging evidence is painting a very different scenario, one in which rising temperatures could benefit millions of Africans in the driest parts of the continent.

Scientists, we are told, are now seeing signals that the Sahara desert and surrounding regions are greening due to increasing rainfall. If sustained, these rains could revitalize drought-ravaged regions, reclaiming them for farming communities. Furthermore, it seems, this desert-shrinking trend is supported by climate models, which predict a return to conditions that turned the Sahara into a lush savanna some 12,000 years ago.

Crucially, much of this relies on work done in 2005, when a team led by Reindert Haarsma of the Royal Netherlands Meteorological Institute in De Bilt, the Netherlands, forecast significantly more future rainfall in the Sahel. The study in Geophysical Research Letters predicted that rainfall in the July to September wet season would rise by up to two millimeters a day by 2080.

Haarsma now says that satellite confirms that during the last decade, the Sahel is indeed becoming more green. Nevertheless, as one might expect, climate scientists don't agree on how future climate change will affect the Sahel: Some studies simulate a decrease in rainfall. "This issue is still rather uncertain," Haarsma says.

Max Planck's Claussen says North Africa is the area of greatest disagreement among climate change modellers. Forecasting how global warming will affect the region is complicated by its vast size and the unpredictable influence of high-altitude winds that disperse monsoon rains, Claussen adds. "Half the models follow a wetter trend, and half a drier trend."

That precisely reflects the uncertainty projected by Professor Conway and others, and completely contradicts the doom-laden certainty offered by Dr Pachauri and his IPCC colleagues. More to the point, since Haarsma was carrying out his studies in 2005, when the IPCC was in the throes of writing up the Fourth Assessment Report, it could or should have been aware of the work.

Instead, it relies on a secondary source written by an obscure Moroccan academic, and published by an advocacy group, which did not even accurately reflect its own primary sources. Yet, it takes bloggers to bring this to the fore, and more bloggers to expand and develop the theme, backed up by their readers with their invaluable input on comments sections, forums and e-mails.

In the free (and rapid) exchange of information and ideas (and mutual criticism), it is us working as a loose community who most closely approach the scientific ideal. This is, of course, why we are winning the intellectual argument. The political battle, though, has yet to come.

(Ed note: I have to drive to Bristol today, and back, so blogging is going to be a bit light - Heaven's knows when I'll be back, but I'll try and post a Horlix. There is tons of stuff to look at, but much of it will have to wait until Monday.)