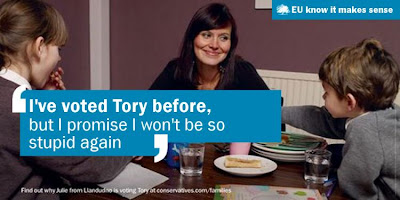 The Sunday Times reports on the latest YouGov poll which has the Tory lead slump to just six percent. The not-the-tory-party makes 39 percent, down one point on January, Labour gets 33 percent, up two and the Lib-Dims drop one point to 17 percent.

We are told that the six-point gap is the narrowest since December 2008, the results suggest a hung parliament with the Cameron's party set to take 290 seats, 10 seats more than Labour.

Even worse news awaits the Boy over in The Sunday Telegraph though. There, a tracker poll by Politics Home has his personal lead over Gordon Brown halved in six months.

The centrepiece of the Cameron experiment has always been that call-me-Dave has been more popular than his own party, dragging it up in the polls.

If the trend continued, says The Telegraph, Cameron and Brown could be neck and neck by the time of the election on 6 May, each with performance ratings of just below zero. Neither Autonomous mind nor Your Freedom and Ours would be surprised.

But what is especially significant is that Cameron's fall from grace began in the first week of November, which coincided with him ditching his EU referendum pledge. He can't say he wasn't warned – he was in no uncertain terms, but the Boy thought he knew better.