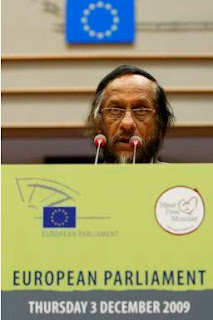 Since taking the chair of the IPCC in 2002, Rajendra Pachauri's own personal research institute, The Energy and Resources Institute (TERI), has enjoyed a multi-million-euro bonanza from EU-funded research projects.

Having led the institute from 1982, in the 20 years before he assumed the IPCC chair, only four EU projects had been awarded. Since then, the institute in seven years has shared in 19 projects worth over €58 million. For many of them, TERI had no obvious expertise or physical presence.

The rush of EU funding to Pachauri's institute – which insiders speak of producing "low quality research" – invites suspicion that the EU is seeking to influence the IPPC chair in favour of the European climate change agenda, ensuring he pulls his punches when it comes to supporting developing countries, including his native India, while wrong-footing the United States.

Pachauri, on the other hand – in so readily accepting millions of euros from the EU for his institute - lays himself open to the accusation of being a pawn of the Europeans, concerned more with promoting his own financial interests than impartially representing the international community.

On the face of it, the facts are damning. Virtually unknown in the West until he became IPCC chair, Dr Rajendra Pachauri's ascension to his elevated position marked a turning point in the fortunes of the institute which he headed as director general.

Before he became chair, TERI's pickings had been thin. Between November 1996 and February 2001, the EU supported another of his enterprises, the Asian Energy Institute, to an unknown amount, but the first recorded grant to TERI was in December 1998. It had participated in a four-year project called COASTIN on "Measuring, monitoring and managing sustainability - the coastal dimension".

That was managed through an office in Goa rather from the New Delhi corporate offices and it was not until May 2000, after Pachauri had been elected co-chair of the IPCC, that another tranche of EU money was awarded to his institute, PRO-CET, a grant of €125,000 towards the €786,830 needed to host an "OPET-Associate" for the Indian sub-continent and the ASEAN region.

This was part of an EU commission initiative called the OPET Network - Organisations for the Promotion of Energy Technologies (OPET) – for which the commission had ambitions of turning into a world-wide network. The funding was only for a year.

On 19 April 2002, Pachauri was elected chair of the IPCC and, in July 2002, his institute started a project in the Gurgaon district of Haryana – to the southwest of Delhi, conveniently centred on the TERI Retreat which now boasts a nine-hole golf course, cricket grounds and a badminton green.

The project was part of the EU's long-running ASIA-URBS programme, taking the institute's involvement through to May 2004. It was aimed at "improving urban environment through the introduction of sustainability measures in building design", TERI sharing €127,332.50 with its local government partner.

The next project was not so long in coming. Named INTEREST, this was worth €650.000 split between six partners, starting on 1 February 2002 and lasting until 31 January 2005 The objective was to "generate tools to support improved ecosystem management for sustainability."

In October 2002, TERI then started on PERIURBAN, a study of, "Sustainable settlements in peri-urban areas: with special reference to impacts of transport and energy on natural resources management". With €687,998 shared between six partners, this was the largest yet.

An invitation to Brussels

Reflecting his new status as IPCC chair, on 12 November 2002, Pachauri was invited to attend as a panel member a symposium in Brussels on "The International Dimension of the European Research Area". He was the only Indian representative present and indentified as head of TERI.

In April 2003, the commission injected more funds into its OPET project, paying €893,374 of its €1,636,910 costs, shared between its 18 – mostly European – member organisations. Nothing much seems to have come of the initiative in the hands of TERI. OPET is now represented in the region only in Malaysia.

By June 2003, however, TERI was already sharing with five other partners a €480,155 project called ED-WAVE, developing "a sustainable framework for training in technologies for conservation, reclamation and reuse of natural resources", with special reference to improving water efficiency.

Most of this was though was part of the EU's INCO (International co-operation) programme designed to spread money, albeit thinly, around the developing world.

But not two years after Pachauri had rocketed to the head of the IPCC, his institute joined the mainstream. He was invited to Brussels to speak at s symposium on "EC Global Change Research: International Partnership" alongside research commissioner Philippe Busquin. Organised by the European Commission, this was held at the Academy Palace of Sciences and Arts on 6-7 May 2004. There were to be many more such events.

A sign of the changed status came when TERI was nominated as a partner in stage three of an ongoing research project called NEU-CO2. Starting in September 2004 and lasting for two years, TERI's task was to assist in setting up the systems to monitor the manufacture of synthetic materials and chemical products, e.g. plastics, paints, solvents, lubricants and bitumen, as these were considered to contribute substantially to CO2 emissions.

For this endeavour, Pachauri's institute shared in the fairly modest €289,656 pot paid-for by the EU. But greater riches were to come.

The next project for TERI started in March 2005. Called TBT IMPACTS and lasting until February 2009, it was co-ordinated by TERI under the leadership of Dr Sangeeta Sonak, with a budget of €799,841.

The task, from the offices in land-locked New Delhi, included an assessment of current policy concerns and developments with regards to the ban on using organotin compounds in antifouling paints and an assessment of their environmental impacts. The project was also to develop a simple biomonitoring system to regulate TBT impacts and help implementation of legislation.

With that in the bag, between November 2005 to the end of January 2006, TERI was again a project leader, this time under the direction of Ms Ritu Mathur, in GAINS-ASIA. This brought together "state-of-the-art disciplinary models on air pollution and climate change to assess technical and market based policies that maximize synergies and benefits between these policy areas."

The pot here was a much improved €1,161,102 – the first million-plus project in which TERI has been involved - of which the EU paid €695,000. As project leader, TERI's percentage would have been significant.

This was followed in short order on 1 April 2006 by T@W, a project on the promotion of sustainable energy technology in the emerging Emission Trading Scheme (ETS) markets in EU and CDM markets in Asia. Scheduled to finish in March 2008, the project cost was €1.24 million, with an EU component of €979,516.00.

By now, the EU was taking a keen interest in Dr Pachauri, part-sponsoring (alongside the UK's DFID) a conference in Delhi on "Adaptation to climate variability and change", organised by TERI. Ms. Soledad Blanco, Director International Affairs, European Commission (Directorate General for Environment), gave the "welcome address".

Then, when the EU commission wanted work carried out in Africa, TERI was chosen, despite having no presence on the continent. This was COMPETE, a "Competence Platform on Energy Crop and Agroforestry Systems for Arid and Semi-arid Ecosystems - Africa". The project started in January 2007 and finished at the end of December last year. Its objective was "to stimulate bioenergy implementation in arid and semi-arid regions in Africa." TERI took a share of the €1,497,000 paid by the EU.

Such was the flow of work that, for the first time, Pachuari's institute was in that January starting another EU project simultaneously. This was EUCAARI, due for completion in December this year, at an overall cost of €15,025,634 – for which the EU has budgeted €9,999,627.

Entitled "a European integrated project on aerosol cloud, climate and air quality interactions" this was also – at first sight – a European affair. But it included "key players" from third countries, of which TERI was fortunate to be regarded as one, enabling it to work alongside the University of East Anglia, School of Environmental Sciences, under the leadership of professor Simon Clegg.

Meanwhile, on the 8th and 9th February 2007, as a sign of the closer relationship, the EU commission launched its "1st EU-India Strategic Science and Technology Workshop," on the theme: "Climate change research needs". Conveniently, the event, co-organised by DG-Research, was held at the TERI office location and inaugurated by the Commissioner for Research, Janez Potočnik.

Now fully engaged on the launch of his IPCC report, and then attending to collect the Nobel prize on behalf of the IPCC, Pachauri had less time to devote to EU affairs. Nevertheless, there was time for SHAPES: small hydro action for the promotion of efficient solutions – "facilitating and strengthening the co-operation between EU Small Hydropower (SHP) Research and Market actors". That started on 1 December 2007 and ended on 30 November 2009. The cost was €833,299 and the EU paid €749,969.

The projects roll in

TERI is not known for its prowess in "advanced wind modelling" – especially in European scenarios where the project is centred. But that has not stopped it becoming a partner, sharing in the French co-ordinated work which will yield €5,581,859, of which €3,992,400 will be donated by the EU.

Only months later, on 1 January 2009, another major project started, in which TERI was a partner. This was CLIMATECOST ending in August 2011 at a cost of €4.61 million of which the EU was paying €3.5 million. Led by the Oxford Office of the Stockholm Environment Institute, TERI was to contribute to determining the "full costs of climate change".

That coincided with the start of ISSOWAMA - "Integrated Sustainable Solid Waste Management in Asia". Requiring, "Networking and preparatory action in view of developing cost-effective, environmentally-safe waste treatment technologies and services adapted to the needs of developing countries, within a targeted life cycle approach", TERI was to share €1,278,698, the EU providing €989,523 for the 30 month duration of the project.

The University of East Anglia cropped up in yet another EU-funded project in which TERI also partnered. That one was called RESPONSES, dealing with: "European responses to climate change: deep emissions reductions and mainstreaming of mitigation and adaptation." Again a largely European affair funded from the main research budget, it started on an unspecified date in 2009 with TERI sharing a pot of €3,149,708.

.Also starting in 2009, officially on 1 May, was the now notorious HIGHNOON. It had been set up to study "adaptation to changing water resources availability in northern India with Himalayan glacier retreat and changing monsoon pattern". TERI gets a share of €4.28 million, of which €3.31 million is to be paid by the EU.

Then, in September 2009 and ending this coming August, TERI commenced work on SETATWORK, a €1.27 million project with €999,972 of EU funding, aimed at the "thematic promotion of energy efficiency and energy saving technologies in the carbon markets".

Also in September 2009, TERI started its involvement in RISKCYCLE, a project charged with defining future R&D requirements "in the field of risk-based management of chemicals and products," with a view to using alternative testing strategies to minimise animal tests.

Additionally, the British government in September last year pledged £10 million to TERI – having already funded the institute to the tune of hundreds of thousands of pounds, while the Norwegian government on 13 November last year signed a 60 million Norwegian Kroners (about €7.5 million) contract with TERI.

For R K Pachauri, whether man-made global warming exists or not, it has proved very profitable indeed for his institute, not least through the "generosity" of the Europeans who seem only too keen to encourage his ambitions.