The politics of climate 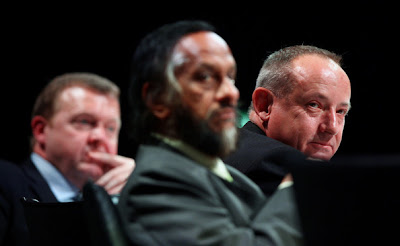 In politics, what you see is rarely what you get. In common with magicians (and confidence tricksters) skilled politicians are masters of the sleight of hand, their words and actions designed to deceive rather then illuminate.

It thus takes Barun S Mitra - director of the Liberty Institute, an independent think tank in New Delhi - writing in the Wall Street Jorunal to sneak a look beyond the smoke and mirrors of Indian prime minister Manmohan Singh's expression of support last Friday for the embattled IPCC chief, Rajendra Pachauri.

The move has surprised many observers, writes Mitra, but it may prove to be politically astute. Assailed by "gates" of all manner and description, the credibility of the IPCC is in tatters which, on top of the much-publicised spat between Ramesh and Pachauri, might have led one to expect the Indian government to ditch their climate champion.

Certainly, that was our expectation but, it seems, Delhi is playing the long game. It is in the Indian government's interest to perpetuate a weak IPCC, and backing a toothless Pachauri at its helm keeps it that way.

Mitra suggests that part of the reason for placing an Indian at the head of IPCC was that he might be able to influence Indian policy. His thesis is that, having bought the idea of man-made global warming, rich countries had to try and ensure that developing countries fell in line.

Whether that was in Bush's mind is debatable but it is certainly the case that Pachauri has assumed that role. But, in his weakened state, he is hardly in a position to lobby India for carbon concessions. Furthermore, no one from the IPCC can again cavalierly dismiss their critics as promoting "voodoo" science or "vested interests," as was Mr. Pachauri's wont.

If one accepts this, it means that Pachauri was becoming a nuisance, if not an embarrassment to the Indian government, pressuring Indian leaders into ignoring the developmental aspirations of their people.

But in democratic India, writes Mitra, even if some Indian elites want to sell the future of the country by agreeing to some form of restrictions on energy usage - and thus on economic growth - in the fiercely competitive world of Indian politics they stand no chance. He continues:

The IPCC was created as a way to make the world, particularly the poor, fall in line and support expensive climate-change initiatives by overwhelming them with the apparent authority of the world's leading technical body on the subject, backed by a supposed scientific consensus. This attempt was doomed to fail, because scientific inquiry does not respect consensus, and orthodoxy is anathema to scientific progress.

Thus, Mitra observes, "there is some poetic justice in this whole drama. Countries like India that were always apprehensive of institutions like the IPCC now prefer to keep it twisting in the wind. The rich countries that gave birth to the idea of the IPCC cannot afford to disown it without exposing their own underlying design."

"They could try to replace its head, in the hope that the new face might be able to rebuild the credibility of the institution. But having tasted blood, there is no reason why India (and China – which is in the same boat) should let the current advantage pass so easily."

Mitra concludes that the IPCC has been checkmated, as have so many other UN institutions before it. This, he asserts, is the inevitable consequence of the desire for global government under the misguided belief that ordinary people do not know what is in their own interest.

"With the deepening of democratic ideals, people power can no longer be overturned so easily. The failure of the IPCC shows that sovereignty still lies with the people, not with the aspirants for global government."

That is a point of view. It seems to have some merit, although one could argue about the details, but has to be the case that developing countries such as India and China, with expanding industrial bases, have more to lose from a powerful IPCC – the Western nations having already sold the pass.

And if that is the case, there is an interesting schism building between the developed and developing nations, the former wanting to get rid of Pachauri, the latter wanting to keep him. Either way, this is a "win" for the sceptics. With the IPCC in disarray, torn by institutional strife, it will be less able to push its destructive agenda.