Even worse than Brown 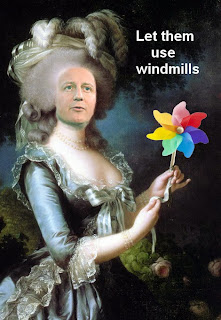 So, the chief political correspondent for The Daily Telegraph, Benedict Brogan, has woken up to the idea that, "Labour has pushed us to the brink of a blackout".

It might have been better, though, if he had been writing this sort of thing a few years ago, as were we, on numerous occasions, when there was still some prospect of doing something to stave off the electricity crisis that faces us.

More damning, Brogan tells us that, "The Tories must rescue Britain's energy policy after years of dangerous neglect," seemingly blissfully unaware of the poverty of the Tories' energy strategy. Dominated by wishful greenie mantras, Dave's idea of a policy is set to turn a crisis into disaster.

That said, we cannot fault Brogan's peroration, where he declares that, "Unless the next government takes rapid, decisive and far-sighted action, the result will be catastrophic." The problem lies in his failure to recognise that, if the Tories get anywhere near "government", the last thing we can expect is "rapid, decisive and far-sighted action."

Evidence of that (not that much is needed) comes from Channel 4 News which claims to have seen a copy of the as yet unpublished Tory energy policy.

From that, it learns that a central plank of their "thinking" is to ramp up micro-generation, from the current administration's 1.6 percent to a massive 15 percent by 2020. Thus, to fill the energy gap, the Tories intend to rely on electricity produced by individuals and communities from rooftop windmills and water turbines, solar panels and boilers fuelled by wood chips.

The idea is so ludicrous that one struggles to believe that any adult, much less a political party, could even contemplate it. But then we need to learn that, when it comes to crass stupidity, nothing is beyond Dave's Conservatives.

With more patience than I could muster, professor Dieter Helm takes them on, pointing out – rather charitably – that "individual householders becoming little generation plants and selling power back into the system is a wonderfully attractive and seductive idea."

But, says Helm, it is extremely expensive because it is unreliable and would need to be backed up by more conventional power sources. "There is no free lunch when it comes to the energy sector," he adds, noting that: "When you generate your own electricity, someone else has to buy it. In the end, other customers pay. Decentralisation is not cost-effective."

This raises a devastatingly obvious issue. To incentivise local production, the current feed-in tariff is roughly twice that of the retail cost of electricity. Those able to afford the expensive generation equipment can sell their electricity and then, effectively, buy it back at half price.

On the other hand, those who can't afford this option, like the six million or so on prepaid meters who are already paying over the top for their electricity, will have to pay even more. And this is what passes for Conservative policy?

With this, the Tories seem intent on demolishing the last, vestigial reason for voting for them at the election. No matter how bad Cameron is, some of the more candid say, he cannot be worse than Gordon Brown. If this is what the Boy has to offer, then we are looking at the very real possibility that he will be even worse than Brown.