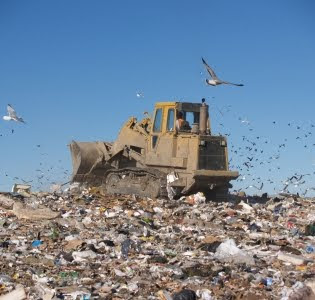 The Daily Telegraph is running as its lead today, "Fortnightly bin collections are to be extended across the country to save money."

In a muddled story, we are told that councils hope that the move will encourage residents to recycle more, "reducing the amount of waste dumped in landfill sites, where it is taxed by the ton." We are also told that councils have been ordered by the government to find £550 million in savings from waste disposal budgets to cope with the pressures of the recession.

As always though when this paper reports on waste issues, there are two words missing from the story: "European Union". And it is the absence of any explanation of the EU influence that robs the story of any meaning.

The key words in what were are told – which give the clue to what is going on – are "waste disposal budgets". Here, it is helpful to know that, of the 27.3 million tons of municipal waste collected in a year (2008/09), about half (50.3 percent) goes to landfill.

This year, however, under EU rules, that figure must drop to 11.2 million tons, requiring about 2.4 million tons more to be recycled. Failure to comply invokes a fine of £200 a ton – around £500 million paid into EU coffers. Without it being specified, therefore, it would seem that the £550 million "savings" are in fines not paid to the EU.

Needless to say, though, things are not quite that simple – they never are. This forthcoming financial year, the landfill tax goes up from £40 to £48 per ton. So, by not landfilling 2.4 million tons, councils "save" £115 million – although the tax is paid into Whitehall coffers, so it would just be a transfer from one pocket to another.

The problem here is that dumping 2.4 million tons in landfill costs councils about £150 million, including tax. But, to divert it to other disposal options will cost between £250 and £500 million, with a significant capital investment for the waste handling and treatment – possibly £1-2 billion.

There are some savings to be made from reducing collection from weekly to fortnightly, but these are marginal, as councils are to impose food waste recycling, and collection will be weekly. Possibly, costs may even increase.

Thus, what this amounts to is that, in order to avoid paying the EU about half a billion in fines, local councils must add at least £100 million extra to their own costs (ignoring capital costs). Thus, the true picture is that we will end up paying more for a seriously degraded collection service. The savings are illusory.

It helps not one whit to learn that this is being done in the name of saving the planet from global warming, but at least we can enjoy the warm glow of satisfaction from knowing that these are yet more benefits of EU membership.