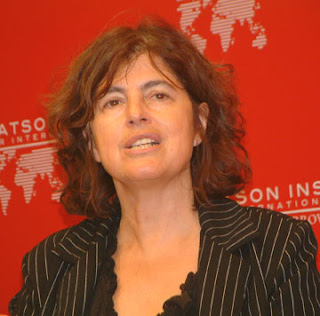 The woman pictured is a professor of global governance and co-director of LSE Global Governance at the London School of Economics. Her name is Mary Kaldor and despite her elevated position and title, she is stupid. We know this. No one gets to that position and remains that ignorant unless they are seriously stupid.

Unfortunately for the rest of us, The Guardian chooses to give Mary Kaldor an outlet through which to display her stupidity – thereby conferring on her more gravitas than she deserves – even the little conveyed by this dismal rag.

Thus we get this stupid woman, under the heading, "The EU needs to return to its roots", telling us via the strap line, "Europe has spent too long besieged by regulation culture and market obsession, forgetting its original purpose: peace."

Her golden words then tell us that the world needs something like the European Union. It needs a global actor, she says, ready to take the initiative on climate change. It needs a polity underpinned by a powerful economy that can push for new global financial arrangements. And it needs political leaders able to articulate and act upon an alternative to the war on terror.

Getting to the root of what she then believes is the cause of its failure to achieve all these great things, she asserts – rightly – that, from the beginning, the EU was a peace project. It was designed, initially, after Europe's great "civil war", to prevent another war on European soil and later to overcome the cold war divide.

But, she tells us – again rightly - the method chosen, known as the Monnet method (after one of the founders, Jean Monnet) was to bring Europe together through economic integration, through policies adopted by the political elite rather than through public debate.

As a result, she continues, to a younger generation, who did not experience the world wars or the cold war, the European Union appears not as a peace project but as a neoliberal bureaucracy, a fundamentalist market project.

Then we get the stupidity writ large. "Somehow, popular support for the EU needs to be remobilised," she writes. "It is perhaps the only way out of the current global crisis now that it is becoming clear how difficult it is for the US president, Barack Obama, to act decisively."

Forget the bit about Obama acting "decisively" – we can only cope with so much stupidity in one sitting – concentrate on her staggering assertion that, "Somehow, popular support for the EU needs to be remobilised."

The whole point, of course, it that the EU never has had popular support and, if it had needed to rely on it – as we saw with the French and Dutch referendums on the EU constitution – it would never have come into being.

And it was precisely because such an undemocratic construct – the aim of which is the destruction of nation states – would never have got public support, that Monnet adopted the strategy of economic integration, as a mechanism for achieving political integration, disguising the aim and pretending that the only objective was economic.

Thus, the state of the European Union is no accident. It has not gone off the rails – it is what it is because that is what it was designed to be. But, as the political integration agenda becomes more obvious, it is meeting with ever-increasing resistance from the very peoples who would never have approved of it in the first place, had they known what was to come.

But, says la Kaldor: "Of course there need to be new, more democratic, structures. There should be an elected president, for example." Then she tells us, "there ought to be a family of taxes at a European level that would allow the EU to develop a degree of autonomy – carbon taxes, for example, or taxes on international speculation."

With the perspicacity that only truly stupid people can achieve, she then adds: "these can only be achieved through political pressure." You don't say!

Needless to say, her innate stupidity re-asserts itself as she concludes with a stunning non-sequitur. "And that means that the EU has to reconstruct itself as a peace (and green) project instead of a fundamentalist market project," she writes.

However, we would love to see it try. I would give it five years before it collapsed.