Another day, another "gate"? 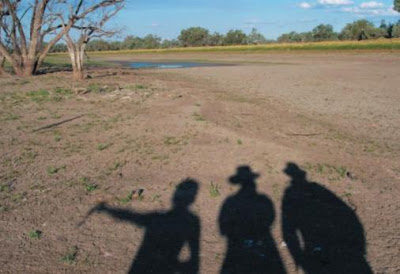 Both American Thinker and Watts up with that pick up on yet another issue in the IPCC's AR4, this one dubbed by Marc Sheppard of Thinker as "Droughtgate", dealing with experiences of drought in Australia.

On the face of it, this addresses another poster child of the warmists, their doom-laden prediction that higher temperatures will increase the frequency and/or intensity of droughts. In fact, according to Sheppard, the reverse seems to be true – that droughts give rise to local increases in temperature, the initial drought event being entirely unrelated to temperature, per se.

These specific dynamics could be important, in two respects. Potentially, it cold be identifying another type of error within the body of the IPCC, beyond miss-citation or unsupported assertions, into the realm of bad science, where the climate body is relying on assertions which are simply wrong.

Secondly, there is a potential link with another assertion, that relating to "Africagate", where the IPCC similarly projects a doom-laden scenario, in this instance that higher temperatures will lead to a fall off in precipitation, cutting agricultural yields by up to half – whereas, in some instances, higher temperatures are actually leading to increased rainfall.

As regards the AR4, the Working Group I report is certainly given to unequivocal headline statements, with Table 9.4 in Chapter 9 stating baldly: "Increased risk of drought due to anthropogenic forcing during latter half 20th century."

This is given a greater than 50 percent probability, putting it in the "more likely than not", which raises an interesting point as to the phraseology. We are told of an "increased risk", which is by definition a projection applying to some future time, yet the time period is stated as the "latter half 20th century." With the report published in 2007, surely the authors mean the 21st century?

Whatever period this is taken to cover, it is clear that the authors have no great confidence in the relationship between droughts and global warming, and the assertion in the table is heavily qualified by a caveat:

One detection study has identified an anthropogenic fingerprint in a global Palmer Drought Severity Index data set with high significance, but the simulated response to anthropogenic and natural forcing combined is weaker than observed, and the model appears to have less inter-decadal variability than observed.

Studies of some regions indicate that droughts in those regions are linked either to SST (sea surface temperature) changes that, in some instances, may be linked to anthropogenic aerosol forcing (e.g., Sahel) or to a circulation response to anthropogenic forcing (e.g., southwest Australia). Models, observations and forcing all contribute uncertainty (Section 9.5.3.2).

Nevertheless, Marc Sheppard homes in on one statement attributed to Australian, Neville Nicholls, which states:

[P]recipitation and temperature are ordinarily inversely correlated in some regions, with increases in temperature corresponding to drying conditions. Thus, a warming trend in such a region that is not associated with rainfall change may indicate an external influence on the climate of that region.

However, Sheppard picks up the trail of Nichols, referring to a 2004 paper, The Changing Nature of Australian Droughts, which is not actually cited by the IPCC. This, though, we are told, states:

The relatively warm temperatures in 2002 were partly the result of a continued warming evident in Australia since the middle of the 20th century. The possibility that the enhanced greenhouse effect is increasing the severity of Australian droughts, by raising temperatures and hence increasing evaporation, even if the rainfall does not decrease, needs to be considered.

Later in the paper, Nicholls concludes that "the warming has meant that the severity and impacts of the most recent drought have been exacerbated by enhanced evaporation and evapo-transpiration."

This is then cross-referenced to "Aussie alarmist", David Karoly, responsible for a WWF report, which discusses the 2002 drought in Australia's Murray-Darling Basin and finds that:

This drought has had a more severe impact than any other drought since at least 1950, because the temperatures in 2002 have also been significantly higher than in other drought years. The higher temperatures caused a marked increase in evaporation rates, which sped up the loss of soil moisture and the drying of vegetation and watercourses. This is the first drought in Australia where the impact of human-induced global warming can be clearly observed.

From that, Sheppard asserts that, the basis for the claim that anthropogenic warming causes droughts put forth in the IPCC's AR4 was a WWF report and its follow-up written the next year. Turning to AR4, however, none of the specific assertions made in this report, or Nicholls's non-cited paper, highlighted by Sheppard, actually make their way into the IPCC report.

Nonetheless, it is those assertions which are challenged in a recent paper in Geophysical Research Letters.

While this ultimately makes sense, however, it does not seriously challenge the IPCC. In fact, a long passage in Frequently Asked Question 3.2 is so equivocal and hedged with caveats that, with careful textual analysis, a reader could draw from it any message they wished. Not least, is this delicious section:

Pronounced long-term trends from 1900 to 2005 have been observed in precipitation amount in some places: significantly wetter in eastern North and South America, northern Europe and northern and central Asia, but drier in the Sahel, southern Africa, the Mediterranean and southern Asia.

More precipitation now falls as rain rather than snow in northern regions. Widespread increases in heavy precipitation events have been observed, even in places where total amounts have decreased. These changes are associated with increased water vapour in the atmosphere arising from the warming of the world's oceans, especially at lower latitudes. There are also increases in some regions in the occurrences of both droughts and floods.

One notes with appreciation the assertion that: "More precipitation now falls as rain rather than snow in northern regions," with Watts up with that reporting:

January, 2008 saw the second greatest snow extent ever recorded. December was the third snowiest on record in the Northern Hemisphere and seventeen out of last twenty-one Decembers were above normal snowfall. November was above normal snowfall and fifteen out of the last nineteen Novembers have had above average snowfall. October was the sixth snowiest October on record and seven out of the last ten Octobers have had above average snowfall.

What thus comes over from the IPCC report, therefore, is that they are over-interpreting short-term data to draw conclusions which favour their premise, covering themselves with sufficient caveats as to make their work look scientifically plausible to the uninitiated.

Be that as it may, on the face of it, there would seem no case for adding "droughtgate" to the list of IPCC misdemeanours, although one could say that the arguments adduced by Sheppard are a useful antidote to the alarmism and amateurishness of WWF.

That, though, is without taking into account the Synthesis Report – Pachauri's "baby". There, we see: "Increases in the frequency and severity of floods and droughts are projected to adversely affect sustainable development" and sundry other like statements, which give no clue as to the uncertainties in the main reports.

One could easily suspect that WWF actually wrote the Synthesis Report and, had they done so, there could hardly be any difference between their version and the published copy.