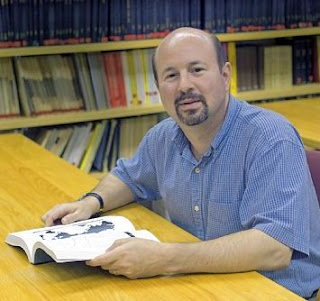 A recent interview with Michael Mann – of "hockeystick" fame - has him in a defensive mood, complaining about the "twisted" media coverage which he has had to endure.

As to redressing what Mann feels is the balance, he refers to "this website" Real Climate, "that I'm involved in along with roughly a dozen other scientists." The purpose of the website, Mann claims, "is to try to communicate to the interested public what the science actually has to say."

What is both so terribly sad and dangerous is that Mann undoubtedly believes what he is saying, and expresses his views in all sincerity. One problem, though. is that the site, recognisably, is about advocacy rather than explanation. It does not tell the public "what the science actually has to say" – it is there to defend the orthodoxy.

Another, more serious problem – which stems from the first – is that the narrative is irretrievably biased, very often subtly, in such a way that the message is wholly distorted, tilted towards the favoured line, in a way that is wholly anti-scientific.

Yet, all along, it represents itself as the unvarnished truth, as presented by honest (implied) "climate scientists", thus claiming a superior status over less well-endowed commentary, which is characterised as "the anti-climate science effort."

Excellent examples of this can be found in the recent post, labelled, with unconscious irony, "IPCC errors: facts and spin", the piece itself a classic example of "spin".

How that "spin" manifests itself can be seen in the treatment of several of the issues raised, not least in the attempt to diminish the importance of "Africagate", which is a classic of its kind.

The main techniques deployed are the "straw man", misrepresenting the nature of the complaint, then to deal with the distorted version rather than the actual case presented, and positive "framing" – building up the report before addressing the criticism. This is then complemented by belittling the criticism.

Thus, we have Real Climate present the issue with the statement: "The IPCC Synthesis Report states: 'By 2020, in some countries, yields from rain-fed agriculture could be reduced by up to 50%."

Now, the essence of the complaint, expressed in Jonathan Leake's article - articulated via professor Chris Field – is that there is "nothing in the report to support the claim." Furthermore, the statement has been widely quoted by Pachauri and others, including Ban Ki-moon, the UN secretary-general.

However, neither of these issues is addressed here. Instead, we are immediately told that the claim is "properly referenced back to chapter 9.4 of WG2." Not said, of course, it that the Synthesis Report was published with great fanfare separately from the WG2 report, and is the one which represents the considered view of the IPCC, the report most widely read and quoted by the media.

Only that smaller number who then referred to chapter 9.4 of WG2 would find what Real Climate now highlights. The chapter section says: "In other countries, additional risks that could be exacerbated by climate change include greater erosion, deficiencies in yields from rain-fed agriculture of up to 50% during the 2000-2020 period, and reductions in crop growth period (Agoumi, 2003)." Of this, we are told: "The Agoumi reference is correct and reported correctly."

So far, therefore, we have two "positive" statements: the Synthesis Report is "properly referenced" and the Agoumi reference is "correct and reported correctly". Actually, neither of these points is at issue – they are irrelevant to the argument. But they have created an impression of rectitude, attempting to condition the reader.

Then comes the "straw man". The main criticism, we are told, is that that Agoumi (2003) "is not a peer-reviewed study ... but a report from the International Institute for Sustainable Development and the Climate Change Knowledge Network". But that is not the main criticism. The main criticism is that there is nothing in the report to support the claim.

However, with the "straw man" up and running, the counter argument is then lodged. Firstly, the "prestige" of the report is built up as we are told that it is "funded by the US Agency for International Development." This, again, is totally irrelevant to the argument but, to the untutored, it confers a certain amount of authority.

An omission is also notable. Although the International Institute for Sustainable Development claims to be a think-tank, it is by its own declaration, an advocacy group. But Real Climate readers are not allowed to know this.

Instead, the author is quite happy to take Leake's evaluation of Agoumi's worth at face value. When it suits, Leake is a reliable source. Thus, the report is written by Morroccan (sic) "climate expert Professor Ali Agoumi". Whatever Agoumi is, he is not a "climate expert" and, particularly, he has no track record in climate impacts. But the description serves, so it is used.

As for the report itself, this is given the most positive spin possible. It is, "a summary of technical studies and research conducted to inform Initial National Communications from three countries (Morocco, Algeria and Tunisia) to the United Nations Framework Convention on Climate Change."

By contrast, Leake's point is that Agoumi refers to "other reports prepared by civil servants in each of the three countries as submissions to the UN. These do not appear to have been peer-reviewed either."

Given a more critical and searching demeanour, Real Climate could have noted that, rather than refer to Agoumi, the authors of the WG2 report could have referenced the Initial National Communications – the primary rather than secondary sources.

This is a simple, obvious point that any real scientist would make. You do not, as a rule, reference secondary sources when primary sources are available. If you did that in a PhD thesis, an alert supervisor or examiner would strike it out and you would be made to go back and cite the originals.

The IPPC report, of course, is not a PhD thesis - it is supposed to the "gold standard". Yet what would be unacceptable of a collage graduate is deemed by the "climate scientists" of Real Climate to be perfectly acceptable for the IPCC.

This, however, is also the nub of the argument. Had this issue been explored, it would have been seen that the references cited by Agoumi did not support the contention he had made – thereby standing up Leake's complaint, that there is "nothing in the report to support the claim."

Instead, Real Climate does not even deal with the real complaint, instead averring that the Agoumi report "is a perfectly legitimate IPCC reference". Even if that was true, it does not address the substantive issues.

What we then get is a lengthy dissertation about the contents of chapter 9.4 – none of which is at all relevant to the issue. But it allows the comment that it "sounds like a balanced discussion of potential risks and benefits, based on the evidence available at the time – hardly the stuff for shrill 'Africagate!' cries."

The technique here is wearily transparent. Having trotted round the block with your "straw man", you belittle your critics.

Then, and only then, do you add as an afterthought: "If the IPCC can be criticized here, it is that in condensing these results for its Synthesis Report, important nuance and qualification were lost."

By such means, the substantive and very real issue is reduced in scope and importance to a mere footnote, a minor misdemeanour rather than a major and glaring felony.

This is not honest science. It is dishonest wordplay, and all the more contemptible for its pretence at being something else. If the authors believe – like Mann – they are telling the truth, they are deceiving themselves. It is self-deception writ large.