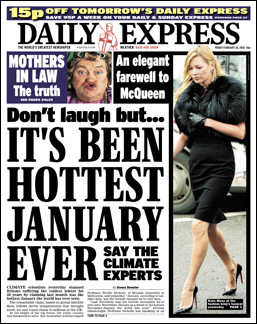 Close to the mood of the public, that is what the Daily Express is telling its readers – with some panache, putting their injunction on the front page.

Our dedicated band of climate "scientists" have a real problem here, as the paper declares that they "stunned" Britons suffering the coldest winter for 30 years by claiming last month was the hottest January the world has ever seen.

The legend is conveyed to us by Australian "weather expert" professor Neville Nicholls, of Monash University in Melbourne. He is cited as saying: "January, according to satellite data, was the hottest January we've ever seen." He adds: "It's not warming the same everywhere but it is really quite challenging to find places that haven't warmed in the past 50 years."

But we also get UK forecaster Jonathan Powell, of Positive Weather Solutions. He tells us: "If it is the case and it is borne out that January was the hottest on record, it is still no marker towards climate change." Powell then adds: "It's all part of a cyclical issue and nothing should be read too deeply into that."

He continues: "It's been the coldest for 30 years in Britain but we predicted that and climate change always tends to throw up anomalies. It's all in line with predictions and I won't be sold on climate change at all. The data is (sic) either faulty or manufactured to make it look like it shouldn't."

There is, of course, no question about the latter assertion. The "global" temperature is manufactured. It isn't real. All it represents is a particular value from a particular set of heavily adjusted temperature measurements, assembled using questionable and less than transparent methodology.

The flaws in the whole concept were pointed out by none other than James Hansen, and now the absurdity is being revisited, with predictable results. Given what has been made of it though, tears rather than laughter are perhaps more appropriate.