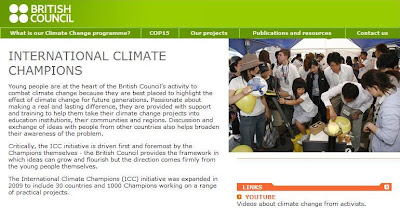 In the space of two years, the British Council has spent more that £3.5 million of British taxpayers' money on climate change propaganda – according to information released to this blog under the Freedom of Information Act.

It has been spent on recruiting young people in 60 countries to pressurise world leaders to "to take action on climate change". This included funding groups to attend the December Copenhagen summit in order to take part in demonstrations.

Founded in 1934 to promote Britain's international cultural relations, and funded heavily by the Foreign and Commonwealth Office (FCO), this body until recently chaired by Lord Kinnock has become one of Britain's lead bodies overseas, in promoting the climate change agenda.

The £3.5 million expenditure has been incurred on two initiatives. The first, and most expensive, costing £2.5 million, is the "International Climate Champions" programme. which "engages young people around the world as communicators who will help to influence and educate their peers and the general public on the urgency of climate change".

This is matched by the European element known as "Challenge Europe", which has cost hard-pressed British taxpayers £1.1 million to date. The British Council describes it as a three year project "that aspires to make a definite and lasting impact on the climate change debate, and is ambitious in its aim to accelerate change to a low carbon future."

As regards the flagship programme, the "International Climate Champions", this was launched in 2008 in 13 countries (Brazil, Canada, China, France, Germany, India, Italy, Japan, Mexico, Russia, South Africa, the United Kingdom and the United States) and then grew to encompass more than 800 in 29 countries.

Last year, this was expanded to 60 countries across the globe, recruiting over 1,300 young people "who are passionate about and committed to taking action on climate change." The British Council describes their "champions" as "not only leaders in their communities" but young people who "are also participating in international peer networks, both in person and online, to share ideas, projects and experiences."

Nevertheless, taxpayers will be pleased to learn that the money is in good hands. Head of the programme is the famous Dr Viner, formerly of the East Anglian Climatic Research Unit. It was he who in 2001 was telling The Independent that within a few years winter snowfall would become "a very rare and exciting event".