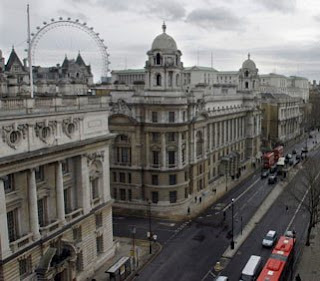 Cash-strapped Gordon Brown is buying £60,000,000-worth of "carbon credits" for Whitehall and other government offices in the UK, as well as British Nato bases in Europe.

While the rest of the country shivers in the cold, with householders wondering whether they can afford their mounting heating bills – inflated by hidden "carbon taxes" to pay for the carbon emissions produced - bureaucrats in their centrally-heated government offices can keep producing "greenhouse gasses", their emissions paid-for by British taxpayers.

The details, which were not announced publicly, emerged last week on the EU's official website, announcing a contract to Barclays Capital PLC to buy the credits on behalf of the government's buying agency in Liverpool.

They will be bought under the UN's Kyoto protocol "clean development mechanism" (CDM) which allows from third world countries using carbon-reducing schemes such as windfarms to sell "credits" for the carbon dioxide they save – worth approximately £12 a tonne.

Developed countries, which have agreed to cut emissions by 5.2 percent from the 1990 levels, can bypass their carbon limits by buying credits. This allows them to keep producing emissions, offsetting the carbon produced, and still meeting their obligations under the 1997 Kyoto climate change agreement.

Other buyers to be used by the government are the Somerset firm CO2Balance, Eco Securities and J P Morgan, both in Oxford, and an offshoot of the electricity giant, EDF Trading.

Overseas companies are also being drafted in to help the government buy up credits worldwide, including Geneva firm Essent Trading, the European Carbon Fund based in Luxembourg, and a carbon trading operation in the Isle of Man called EEA Fund Management - Trading Emissions PLC.

First Climate Markets AG, in Bad Vilbel, Germany and South Pole Carbon, in Zurich, Switzerland are also part of the Europe-wide deal, which will net them typically 15 percent or more of the selling price in commissions – giving them a £9 million tax-funded bonanza.

Each government department will be billed separately for the carbon credits they use, which will include the Ministry of Defence. It will have to divert millions from front-line troops in Afghanistan, to cover the emissions from defence buildings, including those in Germany where our Nato troops are based.

While "Our Boys" risk their lives in Afghanistan, therefore, MoD bureaucrats, safe in their heated offices, will be creaming off money from front line-equipment to keep themselves warm – their contribution to saving the planet.

(Trying my hand at tabloid-style "purple prose". It makes a change from the usual style! Ed)