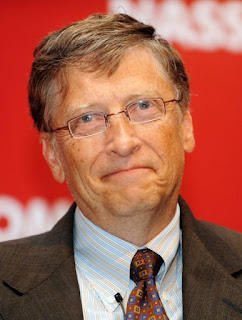 The man who brought you the computer equivalent of a train wreck, Bill Gates, is now turning his attention to the crise du jour, global warming, an issue which seems to entrance the great and the good, and the fabulously wealthy.

Many people would prefer he devoted his time to fixing his Windows operating system, but instead we have the great man standing in front of a gilded audience, telling them: "The formula is a very straightforward one ... More carbon dioxide equals temperature increase equals negative effects like collapsed ecosystems. We have to get to zero."

In front of a more "robust" audience, such utter tosh would be howled down, but such is the power of prestige that the man can escape without being drowned in a wave of derision.

It says everything of the audience, however, that one of the members was al-Gore, the man who needs a bodyguard to do a book signing, and is himself the butt of innumerable jokes, to the extent that his credibility is below zero with the general public.

But within the glitterati – where the denizens are completely detached from reality – their fantasy world survives intact, while they congratulate themselves on their cleverness and concern.

But, of course, behind the facade is the greed. Al-Gore was there to tout his "Alliance for Climate Protection", a political lobby aiming to push cap and trade through the Senate.

A vital step will be to put a price on carbon dioxide emissions so the cost of polluting the air gets factored into the global economy, says Gore, oblivious to the costs it will impose on millions of ordinary people, but doubtless very conscious of the huge profit opportunities which will help line his pockets.

Thus, as always, when rich men start talking of the "public good", watch out for your wallet - a view echoed by Autonomous Mind.