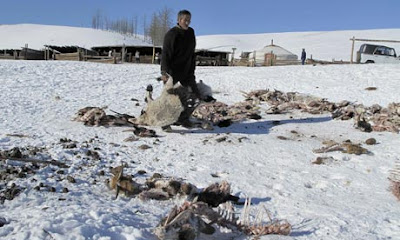 The plight of the Mongolian population, which is struggling through one of the worst winters in living memory, has at last been officially recognised. According to The Guardian - the only newspaper so far to record the event – the UN has launched a $4m appeal to clear up livestock killed by the big freeze in the country.

Rather than give money directly, creating a dependency culture, nomads are to be paid to collect and bury the carcases of animals killed by the cold, with a view to preventing disease and soil contamination.

The appeal comes after officials in Mongolia have declared more than half of the impoverished country a disaster area. So far, at least 2.5 million livestock have perished after weeks of persistent snow and temperatures below minus 50°C.

On current government estimates, three million more animals will die before the cold weather ends in June and the total economic losses so far are put at $62 million. Nearly two-thirds of the country has been buried under eight to 16 inches of hard-frozen snow, making grazing impossible for the country's herds of cows, yaks, goats, sheep, horses and camels.

As we have already noted, the slow response to this disaster – which has been completely ignored by UK charities - contrasts unfavourably with the concern shown by Oxfam for supposed climate change-related problems in the region.

One might have thought, therefore, that some alarm might be expressed about how charities dedicated to humanitarian relief are allowing their obsession with global warming to detract from their core mission.

That, however, does not seem to have occurred to Greg Clark, Conservative shadow secretary for energy and climate change. Recently addressing the National Council for Voluntary Organisations (NCVO) annual conference, he told delegates that all organisations must make climate change central to their operations.

Charities have an important role to play in "humanising" climate change and showing the public how it is affecting populations, he said, acknowledging that campaigning and advocacy as a crucial role for charities dealing with climate change. He wants charities to take a lead role in raising awareness of climate issues.

More than content to see efforts thus diverted, Clark was evidently unconcerned at the modest amounts being directed to major disasters such as that affecting Mongolia, heedless of the billions being expended on climate change, much of it totally wasted.

Even a fraction of the amount spent by the UK government on carbon credits to keep civil servants warm would resolve the immediate problems in Mongolia, and perhaps help keep some children alive.

However, such is the mood of the age that we must learn to live with a new aphorism, that "charity begins with climate change". The likes of Greg Clark would obviously agree.