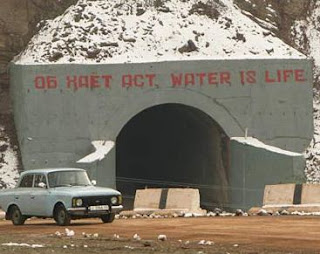 Featured prominently in today's Guardian and dutifully mirrored by the BBC is a tale of woe, headlined: "Tajikistan facing water shortages and climate extremes, report warns". The strap line reads: "Falling supplies due to rising temperatures and retreating glaciers could spark conflict between water-stressed countries in the region, says Oxfam."

Few will actually read the Oxfam report and fewer still will have the background knowledge to understand how fundamentally dishonest it is. In pursuing its own distorted agenda on climate change, the charity is exploiting the misery of the peoples of Tajikstan, wilfully distorting the cause of their plight.

A taste of that dishonesty, writ through the entire 24-page production, comes at the very end, where the pomposity is of quite staggering proportions:

Oxfam International's experience in more than 100 countries around the world that a combination of active citizens and effective state action is the best way of securing development and poverty reduction. It is also best way of preparing for climate change. Tajikistan's civil society organizations need to be involved in the development of concrete proposals on the content and direction of national adaptation and mitigation policy. There needs to be a concerted campaign, supported by both government and civil society organisations, to broaden awareness of the challenges of climate change and the need for action to the public at large.

For a different and altogether more candid "take", however, you need only turn to the Crisis Group summary, dated 12 February 2009:

Since the civil war (1992-97), government advisers and international donors have repeatedly called for sweeping reforms to address food security, diversify the economy, dismantle opaquely run state monopolies and stop the looting of state coffers. Nothing has happened.

Significant improvement is highly unlikely under President Rakhmon's leadership, and may well take a generation. Whether Tajikistan can last that long is an open question. Donors need to address corruption in a coherent and unified way if they want to avoid seeing the country slip back into failure. A new framework for aid, based on strict conditionality, is urgently needed.

The government pays little, if any, attention to these problems. Ministries and state bodies that are of direct political or financial interest to the top leaders and their allies function well, notably the security bloc, along with the highly profitable state-owned aluminium smelter and several other state firms. Other sectors, particularly social welfare, health and education, are ignored and underfunded.

Some 70 percent of the population lives in abject poverty in the countryside, and hunger is now spreading to the cities, particularly Khujand, once one of the most prosperous and politically influential parts of the country. In the past few years increasing numbers of young Tajiks have left the country to work as seasonal labourers, primarily in Russia and Kazakhstan.

In 2008 the number reached a new record, in all likelihood over one million, or at least half of the country's labour force. Their remittances exceeded $2 billion, almost half of the country’s gross domestic product (GDP). The annual departure of Tajikistan's most dynamic and enterprising citizens has up to now provided Rakhmon with an economic lifeline, not to mention a political safety valve by removing those most likely to oppose the regime.

With the onset of the world economic crisis, however, labour migration is likely to diminish sharply in 2009, and along with it the remittances that are so vital to the country's economic stability.

Even a straight factual report tells you the country is in dire trouble and the most superficial level of research tells you that, of all the problems confronting the peoples of Tajikstan, "climate change" is the least of them.

And should that actually be a problem, the Oxfam nostrums verge on the surreal: "There needs to be a concerted campaign, supported by both government and civil society organisations, to broaden awareness of the challenges of climate change and the need for action to the public at large."

With a corrupt, dictatorial government, thieving as much of the aid that comes its way as it can – totally heedless of the welfare of its people – there is no civil society. This is a country where journalists have to use assumed names to avoid being picked up by the secret police. The idea of the government mounting an "awareness" campaign on climate change would be laughable, if it were not so utterly absurd.

As to "climate change", it is true that the country has experience some terrible weather over the last few years. Though the winter of 2007-8, it went through an unprecedented (in recent times) period of cold, similar to the Dzud which is has been blighting Mongolia and is still at crisis point.

Back in Tajikstan, in February 2008, the UN had to step in with a "flash appeal," calling for an immediate international infusion of $25.1 million. "At least 260,000 people are in need of immediate food assistance," the appeal stated grimly. "Moreover, the government reports that up to 2 million people may require food assistance through the end of the winter, if limited food and fuel supplies in rural areas are not replenished," it continued.

In August 2008, Reuters was reporting that the UN World Food Programme (WFP) was to supply Tajikistan with $10 million worth of food to avert famine, as the prices of bread and vegetable oil had more than doubled. It noted that the Tajik economy and infrastructure were still in tatters following the civil war in the 1990s. A foreign debt of more than 40 percent of gross domestic product was adding to its woes.

Over 2008-9, Tajikistan was hit by another harsh winter and, in March 2009, the minister for economic development and trade was reported as admitting that the chronic power shortage in the country was bound to have a "cumulative effect" on the economy. The National Bank estimated the weather-related economic loss at $250 million in January and February alone, a calamitous figure in a country where the annual state budget was roughly $610 million.

And, when it came to the "water shortages" which the current Oxfam report highlights, experts were then expressing concern that once all the snow that fell this winter started to melt, the country's already over-taxed sewer and water-supply systems would collapse. It was not the "shortage", per se that was a problem but the lack of infrastructure that left 41 percent of the population without access to reliable drinking water.

Needless to say, coverage of the crisis by state-controlled media outlets was "muted", with a notable lack of criticism of official policies.

Even then, the pain continued. In January of this year, there was a report of an earthquake in southern Tajikistan, leaving 20,000 people in an area bordering Afghanistan to face a freezing winter weather without permanent shelter. Yet, a year later, we have Oxfam dribbling on about "climate change".

Meanwhile, as the crisis in Mongolia intensifies, leaving millions at risk of starvation, we hear not a word from Oxfam or any other British charity. One of our forum members raised it with the joint Disasters and Emergencies Committee, only to be told that, "few of our agencies have a presence anywhere in China and none has approached us to enter discussions over the possibility of an appeal."

Thus, while the plight of the people of Mongolia is ignored, no expense is spared by Oxfam to exploit the people of Tajikstan (and our compassion) in pursuit of an overtly political agenda, aided and abetted by a section of the media – and, of course, the BBC.

There is something particularly loathsome about exploiting other peoples' misery to pursue an agenda, while ignoring others because it does not fit with the narrative. In doing this, Oxfam has crossed the line. Alongside the climate specialists who are committing scientific fraud, we now have a British charity committing compassion fraud. Can it sink any lower?