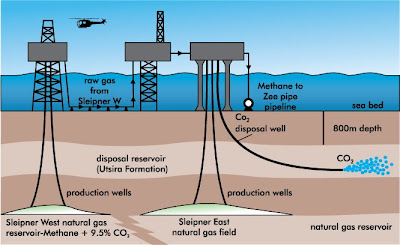 Yesterday's post on carbon capture and storage (CCS) provoked a worrisome e-mail drawing attention to a piece in the Canada Free Press, the headline of which declares: "Geologic Carbon Storage Can NEVER Work, says new US study."

The study, in fact, is not that new - it was first aired in October 2009, by two Texan petroleum engineers, professors Christine and Michael Economides. But the findings are unequivocal and damning. Reservoir volume required to store CO2 has been vastly under-estimated and far more hugely expensive injection wells will be needed than has been anticipated.

One study, of course, cannot be taken as the last word on such a complex subject, but a wider review of the issue yields remarkably little more information. What does emerge, however, is a commentary from Imperial College, which seems to offer some support for these claims.

One key aspect of CO2 storage that has been largely ignored to date, we are told, is the issue of injection rate into the subsurface. A typical 1GW coal-fired power plant produces 20,000 tons of CO2 per day, which must be injected into an aquifer at this daily rate for decades.

In two ongoing CO2 storage demonstration projects, we also learn, it has proved impossible to inject CO2 at the predicted rate without exceeding the fracture pressure of the aquifer formation. Conversely, each injection well costs millions of dollars and has an environmental impact on the surface so it is not acceptable to drill too many wells.

Further problems arise in salt water aquifers where there is competition between salt precipitation and carbonate dissolution. Precisely what happens over the long term is not known. But there are some fears that, as volume of CO2 injected increases, injecting even more could get harder (and more expensive) rather than easier. It could even be the case that the energy required to pump the CO2 exceeds that of the power station producing it.

Michael Economides explores his own paper, produced with "the smarter Economides", his wife, in another article, where he calls CO2 sequestration a "fantasy". In yet another, he argues that, just to service the CO2 output of a 500 MW power plant – producing about 3 million tons per year – the reservoir needed would be enormous, the size of a small US state.

For those reasons, we are told that geologic sequestration of CO2 is "a profoundly non-feasible option for the management of CO2 emissions". And Economides is now trying to save the state of Wyoming from wasting a mere $45 million on CCS research. There is no need to research this subject any longer, he writes. Let's try something else.

As it stands, no one is in a position to dispute these assertions, not even (or especially) Joan Ruddock, currently minister of state for Energy and Climate Change. Speaking in last Wednesday's Commons debate on the Energy Bill, she told the House:

The only thing close is the Norwegian Sleipner project (schematic pictured), pumping just short of a million tons a year of CO2, separated from the natural gas extracted from the offshore field, into a saline aquifer.

However, Ruddock thinks that the results achieved in Norway, "enable us to say with confidence that we know that the storage end of the chain seems to be practicable." This is despite the system injecting only three times the amount in a month what a 1GW plant will have to sequester in one day. There is a huge gap here, which Economides argues cannot be filled.

Greenpeace, on the other hand – which is opposed to the idea of CCS - argues that the reservoir is not immune from leakage and that it is impossible to predict the movement of injected CO2, which is already behaving in an unpredicted fashion.

Reading the Commons debate, therefore, was a disturbing experience, not least for the gung-ho attitude of all the speakers, and the constant reference to "consensus" about the need for CCS. Where one might at least expect some caution from the Conservative opposition, we instead get Charles Hendry, the shadow energy minister. He wants the programme speeded up, to give the UK a technological lead.

This sentiment is shared by the chairman of the environmental audit committee, Conservative (in name only) MP Tim Yeo. He complained to The Guardian that the government's approach had "too often been characterised by indecision, jeopardising Britain's chances of building a commercially valuable competitive advantage in this field." Seemingly, he is unaware of the "valuable competitive advantage" we are giving India.

This is where it is getting extremely worrying. Already, we have been spending tens of millions on research projects, which have since expanded into hundreds of millions. Now we are now moving into a phase where the research is set to cost us billions. Each of the four demonstration projects proposed by the government will have a price tag of at least £1 billion, money which we are going to have to pay through our electricity bills.

The ball park figure may even be an under-estimate. The sequestration module alone for the Sleipner project cost €350 million. On top of a gas field, with the infrastructure already there, that project represents only a fraction of what a land-based project might cost - not least to fund an expensive pipeline transport network.

Terrifyingly, there seems no mechanism for stopping this madness, with the UK committed to retrofitting the technology to all (then) existing coal-fired power stations by 2025 – if there are any left. Money desperately needed to maintain and extend our electricity capacity is literally being pumped down holes in the ground and even that, most likely, is not going to work.

Generations to come are going to look upon this madness with the same puzzlement that we currently reserve for the medieval enthusiasm for burning witches, asking how it is supposedly rational people could be so easily led astray. Even in the here and now, that is not an easy question to answer.