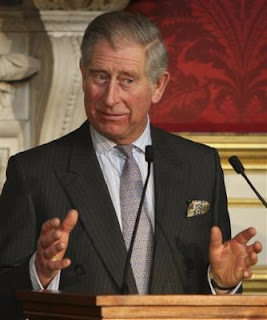 The Prince of Wales "spoke out" yesterday, according to The Scotsman, over his "dismay and alarm" at those who question the science behind climate change.

In his strongest comments yet attacking so-called climate sceptics, Charles said the evidence for manmade global warming was "utterly overwhelming". Anyone who refused to play a part in tackling global warming were playing "Russian roulette" with their children's futures.

Charles said carbon dioxide levels are 40 percent higher now than they were before the Industrial Revolution and spoke of the "alarming messages" from explorers such as Pen Hadow about the melting polar regions of Earth. (my emphasis).

I don't think he can realise that anyone who takes Pen Hadow seriously simply is not worth listening to. Charles, therefore, makes for a sad little establishment figure, wrapped up in his bubble, totally oblivious to the real world – of which he has never been part.

Like so many establishment figures, he cannot even begin to countenance that he could be wrong and, surrounded by sycophants and courtiers, there is no-one to tell him that. His stance is that, because he believes something – and everyone around him tells him how clever he is – everyone else should believe it.

In a way, you can almost feel sorry for him, except that there is a strong core of arrogance here as well. And it does not matter how well motivated he is – pulling the "children's future" card is so low grade as to be despicable. How dare he presume that "sceptics" are any less concerned for their own children, or that their convictions are not a match of his?

Moreover, anyone who read the piece in Watts up with that yesterday, and understood the political implications (I will write about them later today), will realise that the global warming creed – in effect if not intent – is pure evil.

By focusing on carbon dioxide instead of real pollution (something of a refrain of mine) the warmists are diverting attention, funds and resources away from the problems that are killing people by the hundreds of thousands, and blighting millions of lives.

Further, as we run into the third severe winter in a row, with Watts telling us that the US is about to be hit by another major snowstorm, there is a very real possibility that we are entering, if not actually in, a period of cooling. And, as is evident to anyone who has evaluated the relative consequences, that – not warming – is the more immediate and far more serious danger.

Charles and his ilk, therefore, do themselves no service. They invite derision and contempt – and a deal of resentment. We can do without their preaching and do not recognise their right to take the moral high ground. Thus, while Charles may complain about facing "unbelievable abuse" every time he opens his mouth to speak his mind, there is a very obvious remedy.