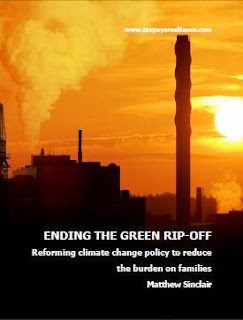 One used to enjoy the periodic rants from Simon Heffer, especially when they are directed at the putative chancellor, little Georgie Osborne – although the constant repetition is now getting a little tedious.

Nevertheless, amongst the many sins which Heffer lays at the door of this political dwarf is his timorous approach to public expenditure cuts, the only firm commitment being to shave a mere billion from the total, even when Heffer identifies £72 billion being spent under the category "other" expenditure.

Heffer, though – like so many who brand themselves "political commentators" - seems to have as narrow a vision as the very politicians of whom he is so scornful. He is locked into a somewhat outdated paradigm where he sees government spending as representing sum of the costs imposed on us, primarily though taxation.

He and his ilk do not yet seem to understand that some of the most damaging raids on the private purse are coming not through government expenditure financed from taxation, per se. Increasingly, it is coming through government directed expenditure which is extracted in devious ways via goods and services for which we must pay.

Here, then, is a serious blind spot. In terms of private wealth, what matters is disposable income, the amount of discretionary spending left after tax and other essential costs have been deducted. In terms, it makes no practical difference whether those deductions come as taxation – direct or indirect – or other imposts. Should Heffer have understood and recognised this, his "rant" in today's newspaper could have gained considerably more power.

He could, for instance, have pointed out that the Conservatives are not only pathetic in their lack of commitment in reining back government expenditure but that the parliamentary party enthusiastically backed the imposition of an extra £4 billion in costs last Wednesday, though its support of carbon capture and storage.

This £4 billion is but one tiny part of the avalanche of the "green" Danegeld which is coming our way, building on the Taxpayers' Alliance estimate in its recent report (pictured) of £26.4 billion in green taxes and regulations that we were forced to pay, net of road spending, in 2008-09.

Of that, just over £1 billion was spent on the Renewables Obligation (£1,036,170,245) – up from £873,870,190 the previous year – mainly to finance the scourge of windmills that is disfiguring our countryside. Should the government succeed in reaching its wind generation targets, we have estimated that we are looking at an extra £6 billion a year, implementing a policy which again the Conservative Party also enthusiastically endorses.

To that can be added the £2.9 billion extracted from consumers' wallets and purses via the EU's Emissions Trading Scheme – a sum that is expected to double in the forthcoming year – and about £0.9 billion on landfill tax.

These costs (not taxes) are wholly unnecessary. Far from adding anything to the economy, they reduce our efficiency and competitiveness as a nation, with knock-on effects as we price ourselves out of business, competing against low-cost producers such as China and India, which are not similarly burdened.

Throughout this political cycle, however – picking up on a phrase popularised by Blair – commentators have been quick to condemn governments for their lack of "joined-up" policies. But those self-same commentators are stuck in their own little pigeonholes.

Thus we get political pundits doing "politics" and environment correspondents doing "climate change", with a whole raft of specialists doing their own things – the European Union amongst them. No one seems to be able to put them all together and look at the big picture.

Worst of all though, the political commentators tend to regard themselves as the crème de la crème and, having lost sight of what politics is all about, increasingly constrain their own horizons to the trivia and tat of domestic party politics.

Alarmingly, when these pundits do venture out of their narrow, claustrophobic field – as Brogan did recently - they are immediately out of their depth and most often make fools of themselves.

However, real politics is what real people are concerned with and, sooner or later, the self-appointed journalistic élites are going to have to climb down off their high horses and re-learn the art of joined-up commentary. Failing that, they will go the same way as the increasingly irrelevant politicians on whom they expend so much energy.