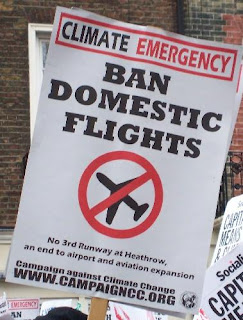 The Department of Energy and Climate Change has been caught in flagrante delicto, or so it would seem. The Daily Telegraph reports that this department, specifically set up to tackle climate change has paid for more than 1,000 internal flights around Britain despite telling the public to cut down on air travel.

However, or so we are told, this is somewhat mitigated by the Government using £35,000 of our money to buy indulgences carbon credits to offset the flights – but that isn't even the half of it.

What we are not told is that the government is co-funding an EU project called CATCH headed by the transport consultancy MRC Mclean Hazel Limited, with the participation of the University of the West of England in Bristol and the public-funded Transport Research Laboratory.

For €1.94 million, of which €1.48 million is EU funding, the project will "develop a knowledge platform" to "provide travellers, businesses, planners and other mobility stakeholders with the tools to play their part in creating a new mobility culture promoting timely and informed climate-friendly travel choice and policies."

The "Holistic Platform" (i.e., website) "will enable travellers to understand the climate change impacts of their choices, and take effective actions to reduce them, and enable policy decision makers to include carbon constraints into their actions."

Nor indeed is this the full extent of the EU involvement. It also has on the go a project called WISETRIP, in which the University of Aberdeen and the Angus Transport Forum is taking part. For €2.14 million – of which €1.44 million is EU funding – they are designing a network of interconnected Journey Planner systems to combine urban and Long-Distance Transport information services, all of which is supposed to integrate with the CATCH project.

Then there is the i-Travel project which for €2.27 million – of which €1.46 million is EU funding – is set to develop "a personalised, context-aware online 'virtual travel assistant' service for travellers, both before and throughout their journey."

This, in turn is augmented by CIVITAS, a €24.48 million project, with €15.29 million of EU money, aimed at improving "sustainable transport" and "pushing citizens towards the desired behavioural shift".

With all that effort, and something like €30 million being spent on guiding travellers towards making the "right" choice of journey plan, the very least DECC could do is take a little notice of what is going on. But then, I suppose, we are dealing with the mindset of our rulers, who subscribe to the dominant ethos of "do as I say, not what I do".

When CATCH goes online in 2012 and becomes available to the public, though, at least we will have some guidance in telling them what to do with it.