You will love this 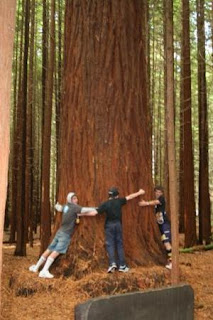 Hot on the trail of the Golden-Gate scam, a reader draws my attention to an article in the San Francisco Chronicle for 6 July 2009.

The title of the piece somewhat gives the game away, as it declares: "Get ready for even foggier summers". The opening lines of the text tell us that the Bay Area just had its foggiest May in 50 years. "And thanks to global warming, it's about to get even foggier."

This makes an interesting counterpoint to the article in The Daily Telegraph today, proclaiming: "Fog over San Francisco thins by a third due to climate change".

The lead author of the 2009 study is Robert Bornstein, a meteorology professor at San Jose State University who points out that "global warming is warming the interior part of California, but it leads to a reverse reaction of more fog along the coast."

We are told that study would appear in the journal Climate, which may be this one here, headed: "Observed 1970-2005 cooling of summer daytime temperatures in coastal California."

Bornstein and team argue that as global warming heats up the Central Valley gets, the greater the temperature and pressure gradients between the inland and coast would be greater - therefore forming more fog.

To demonstrate the thesis, they broke the Bay Area down into smaller regions and looked at daily temperatures for the last half century, focusing on the rapid post-1970 warming period. They found that, although temperatures were trending upward as a whole, they were asymmetric - the hills and inland areas were warming, while low-elevation coastal areas were actually cooling.

This was by no means the only time Bornstein ventured into print, his views being aired in the Ventura County Reporter in October 2008. In November 2007 in the Napa Valley Register, another scientist, Jeffrey P. Schaffer, seemed to support him, predicting that summers in the Bay Area would become cooler, windier and foggier. "And this has already happened," he observed.

However, there is no shortage of conflicting material, this undated paper (circa 1997?) finding a fog decrease in four West Coast locations. On the other hand, this comprehensive review (107 pages) points to considerable variation in fog levels over time, with periods when fog levels were considerably lower than at others.

Ironically – at least, according to the Los Angeles Times, fog is a major nuisance to San Francisco Airport, where Dr Johnstone did his measurements. The two main runways are only 750 feet apart, so they cannot be used simultaneously when it is foggy. If Johnstone's observations about fog were correct, the tree-huggers' loss would be aviation's gain.