Global warming is back 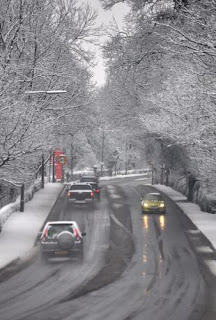 Actually, it's been with us for about a week – light falls, just enough to whiten the ground but not enough to cause any problems. But, this morning, we got at least three inches dumped on the city. Now with clear skies, it is freezing hard.

The local paper picked it up but, contrary to the assertions of that idiot David Viner about snow becoming "a very rare and exciting event", it is so common that it has become routine.

What has also changed is the terminology. It has undergone a paradigm shift. Quite routinely, people refer to the white stuff as "global warming". It has become part of the everyday language that needs no explanation. It no longer even raises a smile: "global warming" means snow.

Needless to say, the paper hypes it up telling us that the weather "created havoc" with the local sports fixtures as football and rugby matches across the district were called off. And there is a "moderate risk" of severe weather affecting us on Wednesday, when we could get as much as four inches of global warming.

This is not in the same league as Washington and many parts of the States, but what was once considered a big deal here is being shrugged off. Apart from the namby-pamby sportsmen, life goes on without a pause. Traffic was running virtually without a glitch.

The routine of it all, though, is a killer for the global warming lobby. They can scream all they like about the planet heating up. Their credibility is shot to hell, covered in layers of white stuff and destroyed by the matter-of-fact sense of humour of a population that knows bullshit when it sees it.

What is really amazing is how slow the politicians are in picking up on this. But then it doesn't snow that often in London and they are so wrapped up their Westminster bubble that they may not have noticed the shift in mood. Perhaps they have - which is maybe why little Dave isn't talking about it.

If he tried raising global warming outside the metropolitan bubble, though, it would probably do no more than reinforce the already dismally low opinion we already have of politicians. It can't get any lower because it's almost certainly as low as it can get. But he can look even more of an idiot than he does already.

Politically, that can be even more deadly than unpopularity.