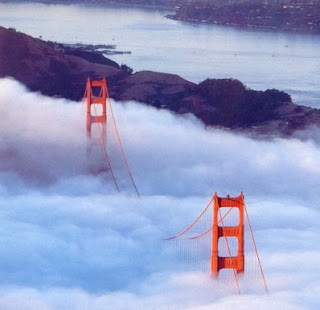 It is business as usual for The Daily Telegraph, resuming its usual slot with a crise du jour story.

This one, by Richard Alleyne, who laughably calls himself a science correspondent is headlined, "Fog over San Francisco thins by a third due to climate change" and the ritual incantation: "scientists have found". Ah ... the scientists!

Interestingly, this is territory where even New York Times does not venture, not mentioning "climate change" in its story. But where the NYT dare not venture, Alleyne fealessly treads.

His scare line is based on work by Dr James Johnstone at the University of California, published in Proceedings of the National Academy of Sciences (PNAS), a journal which also offers such delights as a paper on, "A robust automated system elucidates mouse home cage behavioral structure", in its most recent online edition.

The significance of the finding, we are told by the egregious Alleyne, is that it is not just bad for scenery, the reduction in the cooling effect of the fog could damage the health of the huge redwood forests nearby. Thinking politically, one is almost pleased at the prospect of a particular Redwood being damaged by climate change, but we will pass that one by.

Crucially, though, the Dr Johnstone observes that it was unclear whether the receding fog was "part of a natural cycle of the result of human activity" – or indeed whether this was a temporary phenomenon or a long-term change. That, though, would only support a headline: "Fog over San Francisco thins by a third due to unknown causes", which does not have quite the same ring as the Armageddon scenario posited by Alleyne.

Nevertheless, the original PNAS paper is not yet published, so Alleyne has got his copy from the advance release, and one can assume from that that Dr Johnstone, who recently received his PhD from UC Berkeley's Department of Geography, is not averse to attracting a little personal publicity from a quick scare story.

From elsewhere though, we learn that Dr Johnstone's work is in part supported by the Save the Redwoods League, a multi-million dollar advocacy organisation which last year paid Ruskin K. Hartley, its executive director, a cool $182,154. There's money in them thar redwoods.

Futhermore, there's money in climate change and redwoods. Last year, the League – which has awarded 54 grants totalling $771,000 since 1997, had been offering grants to examine the impact of global climate change on redwood forests.

For the likes of uncritical journalists such as Alleyne and his increasingly dire newspaper, a press release is a story, and another hare is up and running.