How green is my golf course? 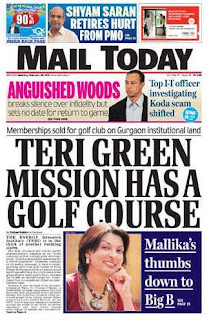 "Happiness in life is based on expectations," writes Rajendra K Pachauri on his own blog. And if your expectations include ownership of a nine-hole golf course, then Dr Pachauri must be a very happy man indeed.

The ownership is reported today by the Indian newspaper the Mail Today which tells us that R K Pachauri's "not-for-profit" TERI - imbued with a mission to "work towards global sustainable development, creating innovative solutions for a better tomorrow" – is the proud owner of a water-guzzling nine hole golf course in Gual Pahari on the outskirts of Gurgaon a satellite town to the southwest of New Delhi.

This much is not new. It was described in glowing terms by the Business Standard in February 2007, when we were told of a "beautiful golf course" that precedes the entrance of a "completely different world from the precincts of Gurgaon".

It is part of the "amazingly landscaped 36-hectare TERI (The Energy and Resources Institute) campus at Gual Pahari." And nestled inside this campus is an unassuming building called The Retreat, a training and recreation centre for TERI staff and executives.

Furthermore, TERI has made no secret of the facility, noting in its Annual report 2006/7 that the golf course had been created "with the intention of promoting golf amongst TERI personnel residing in Delhi and Gurgaon." It was then that the six-hole golf course was being upgraded into a nine-hole green. A 200-yard driving range was "an added attraction" and there was a nine-hole putting course adjacent to the Retreat building.

But, it appears, TERI is harbouring a guilty "secret". The five-acre golf course is part of the 69 acres of institutional land it acquired from Haryana Urban Development Authority (HUDA) in 1985 (below - Google Earth), for the exclusive use of TERI staff. Commercial exploitation is prohibited. 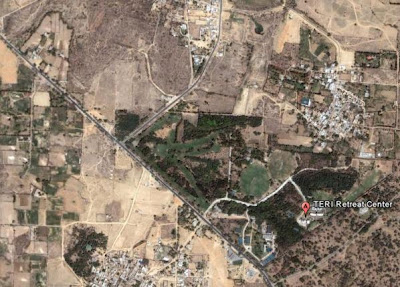 Yet the paper has found that the golf course has been opened up to selected members of the public who are being charged Rs 25,000 (£350) for membership.

According to Gurgaon's district town planner Vijender Singh Rana, commercial activity through sports on institutional land is illegal. "HUDA gave this land to TERI for institutional or public and semi-public purpose."

Rana said. "Though they have asked for change of land use (CLU) regularly from HUDA, permission cannot be given for any sporting activity. If TERI is selling golf course memberships, it is wrong." Rana said the conditions for use of institutional land were clear. "If TERI uses it for its own purpose, there is no problem. But it cannot use it commercially and sell golf memberships," he said.

Needless to say, a TERI spokesperson denied it was making commercial use of the course, something rather contradicted by this piece written in May 2008, to say nothing of this site which refers to green fees. Then there is another, seemingly bizarre, contradiction which has the state government imposing a tax on golf players, a piece in which the TERI golf course is mentioned.

However, this is confirmed by a Mail Today reporter who anonymously contacted course officials and was offered memberships for £350. Furthermore, Mohinder Singh, an official at the course, told the paper that there was a one year waiting time. "Your form will come for review after a year," he said.

Equally contentious is the water usage to keep the golf course green. As chair of the IPCC, Pachauri is voluble in demanding of governments around the world that they cut down on carbon emissions and save water, among other things, to sustain the environment. He is equally voluble about potential water shortages in his home country, arising from melting glaciers and all that. 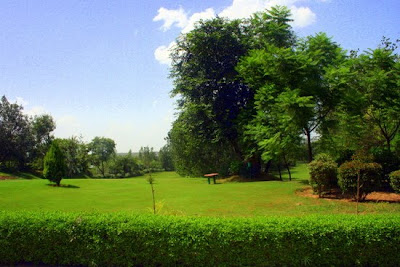 TERI claims that water conservation measures on the campus include "an efficient central rainwater harvesting system in accordance with water conservation guidelines such as drip water irrigation, early morning and late evening half circle sprinkling to minimise water evaporation and loss."

But with the golf course and environs requiring up to 300,000 gallons a day during the summer to keep the lush greenery in condition (pictured above), questions are being asked about the sustainability of the facility, which would have difficulty in meeting the volume required solely from harvested water.

This is especially an issue in Delhi, where water shortage is a major a problem, and more so in Gurgaon. As recently as March 2008, local difficulties were causing scarcity of drinking water in the city.

Then reported earlier this month, serious concern has been expressed about the huge gap between supply and demand and the rapidly falling water table, depleted by an estimated 35,000 bore wells, only 9,780 of which are registered.

With many local residents increasingly struggling to cope with a failing water supply, many eyebrows are being raised at the luxuriant scenery which Dr Pachauri's merry men enjoy as they stroll round the greens in between saving the planet and relieving the misery of the poor.

And for those who are not too keen on golf, there is the world class "TERI Oval" cricket green for gentle recreation. Failing that, there is always the badminton green.

But this is not what most people had in mind when they describe Dr Pachauri and his institute as "green".