A strange and ugly place 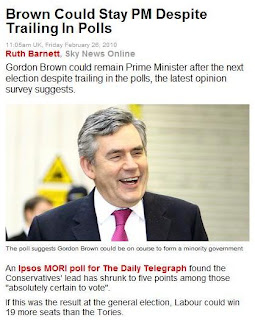 Sky News is by no means alone amongst the media pundits suggesting that the Cameron experiment is about to crash and burn, his party not even being the largest in the next parliament.

This is, of course, just fluff based on a run of bad polls. The election campaign has yet formally to begin and, as we are constantly reminded, a week is a long time in politics. Anything can happen.

However, prediction in politics is as much a black art as it is a science. Reading the mood and "gut instinct" has as much to play as does the number-crunching and all the rest.

As a "player" who campaigned in both the 1997 elections – as a candidate for the Referendum Party – in the 2001 elections, as an agent for UKIP, running a troika of candidates, and in the 2005 elections for the Tories, alongside a sitting MP, I was well-placed to read the mood music in each. And in each, the result was predictable, and I – with millions of others – called the result correctly.

This election is different. There is, as I have recorded many times, a different mood abroad. But there is also a sullenness, indifference and occasionally anger, at the whole political process. And with all the confounding factors, of which there are too many to explore in a short post, the outcome of this coming contest is unreadable.

One thing I know for sure. Never in my adult life have I ever loathed a challenger with such intensity. I have disliked politicians, distrusted them – even hated them. But never have I loathed an individual so much as I do Cameron that I feel physically ill watching him on television or hearing his voice.

In that, I know I am not alone. How much that will be a factor in the coming election is impossible to say. But the polls seem to reinforce the mood and the "gut instinct" – Cameron isn't cutting it. He may drag a narrow "victory" out of the election – just as he did with the euros, with ten percent of the popular vote. But it will not be a mandate.

Politics has become a strange and ugly place. We are perhaps seeing history made, the like of which few alive in England have seen before.