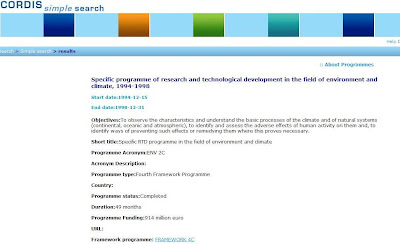 Inherent in the dishonesty of the warmists is the canard raised about the opposition being "well funded", backed by their frequent references to support from "Big Oil".

Already, though, we have identified £243 million of British government money poured into the Met Office for its "climate prediction" programme, going back to 1990.

How much the countries in Europe were also pouring into the pot we have no immediate means of knowing – although it would be useful to find out. But what we do have is the global figure paid out by the EU in the earlier period, taken from the Cordis website.

There, we see that the "Specific programme of research and technological development in the field of environment and climate, 1994-1998" amounted to €914 million – about £650 million in real money. Bearing in mind that the EU, typically, requires match-funding and core overheads have to be borne by the grant applicants, you can probably double that figure when it comes to actual expenditure.

But what is particularly sinister is the programme objective, as set out:

To observe the characteristics and understand the basic processes of the climate and of natural systems (continental, oceanic and atmospheric), to identify and assess the adverse effects of human activity on them and, to identify ways of preventing such effects or remedying them where this proves necessary.

There, writ large, is the a priori hypothesis of "man-made global warming". Hundreds of millions is being thrown at academia with instructions to go out and find the evidence to support the hypothesis. This is at a time – pre-TAR – that "scientists" supposedly had open minds and were gathering information.

Anyone who has the remotest idea of how academia works will know instantly how corrosive this sort of money really is. Department heads, anxious for funding to keep their empires going, would tailor their research proposals to ensure that they conformed with the programme objective.

Without being told, they would know that to submit a counter-hypothesis – that there were other climate drivers, or that mans' influence was negligible - would be to invite instant oblivion. The chances of getting funding would be nil.

I actually saw this at first hand after the 1988 Salmonella-in-eggs scare. With food poisoning in the headlines, the issue suddenly became fashionable in the halls of academia and the Research Councils, MAFF (as it was then) and the Department of Health were suddenly throwing huge amounts of money at the perceived problem.

It was at that time that I decided to do my own PhD, offering a counter-hypothesis that the "egg scare" was an artefact, arising from poor investigational technique, institutional bias and many other factors, including scientific fraud – yes ... we've been there before.

Not only could I not get funding – which hardly surprised me – none of the universities I initially approached would take me on. My very presence on the campus, it was felt, could prejudice the ability to tap into the well of funds aimed at supporting the prevailing hypothesis.

The caution was well-advised. When one brave department head did take me on, he was summonsed down to London and grilled by MAFF officials. Only under the most stringent of conditions was his funding stream allowed to continue, which included my being excluded from all the government-funded activities in the department.

Currently, we have diverse warmists pouring scorn – as they do – on the idea that thousands of "scientists" are somehow part of a grand conspiracy, but that is wilfully to distort the way academia works.

Basically, it is bought and paid for – it will follow the money. If you have €914 million on offer to those prepared to "identify and assess the adverse effects of human activity" on the climate, hundreds and thousands of "scientists" will dutifully fill in their grant applications, proposing to do precisely that. Those who do not conform fall by the wayside – they simply do not get funded.

Then, of course, the overwhelming weight of funded papers is taken as proving the point, and evidence of the "consensus". But it is money, not science, that is talking.