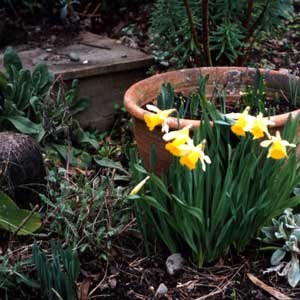 After a period of virtual silence, WWF groupie Louise Gray is back in print on one of her favourite subjects ... early springs, due to ... global warming.

Her source is the Centre for Ecology and Hydrology (CEH) and, as is her wont, little Louise has faithfully copied out the centre's press release on a recently published study by Dr Stephen Thackeray and Professor Sarah Wanless.

Their research gathers together more than 25,000 long-term phenology trends for 726 species of plants and animals, over the period 1976 to 2005. It thus seems to have escaped the attention of these little darlings that it is now 2010.

Despite this, we get the statutory dollop of warmist propaganda, this time from Richard Smithers, of the Woodland Trust. He prattles about the "delicate ecosystems" being "the canary in the cage" of climate change. "The results of this new study make real our changing climate and its potential to have profound consequences for the complex web of life," he says. P-leeeeze!

As the global warming swirls round darkest Yorkshire, with heavy snow forecast, they might note that we have had three cold winters, each more severe than the last, and we're reverting to "normal" seasons, something little Louise herself wrote about last year.

In this current effort, though, the forgetful Louise is aided and abetted by a gullible headline writer who informs us: "Spring is coming 11 days earlier on average." An accurate portrayal of the CEH work, however, would have conveyed the information that the end point of the research was 2005. This is history, not news.

Of the "gate" controversies dominating blogosphere discussions on global warming, news there is none in The Daily Telegraph, demonstrating once again the extent to which this newspaper – like the political classes it serves – has lost the plot.