"We're winning and they're losing" 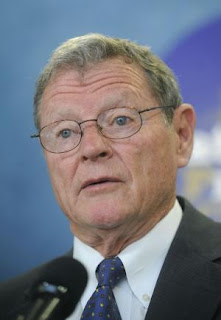 In an interesting development in the ongoing saga of global warming - tell that to the Americans today when their "snow hurricane" hits them - Steve McIntyre has a novel perspective on the similarities between the "Climategate and Enron.

We are getting to the stage, though, where the whole climate charade is unravelling before our very eyes at a speed almost too fast to follow, leaving Real Climate railing against the "collapse" of journalistic standards.

That, in itself is highly indicative. We hear nothing about the constant diet of lurid scare stories in the media, but when The Guardian - of all papers - "sins" by offering semi-critical pieces, it gets a full broadside.

Criticism, however, is not confined to this obscure and ill-tempered blog. Tilts at journalists are one thing both warmists and sceptics have in common, even if UK media comment is still relatively muted.

For sure, we've had The Times pick up on the Met Office story about it wanting to revamp the temperature database, a story that Watts up with that? had a day earlier, after it was covered by Fox News.

We've also had Geoffrey Lean doing a bit of reporting instead of pontificating – which has to be a first. He is telling us that our favourite stage villain, Dr R K Pachauri, is facing his critics in Bali tonight – the environmental ministers of the member states who make up the UNFCCC.

According to Lean, he will try to save his job and shore up support for the IPCC in the wake of the discovery of "errors" (note the plural) in its latest report. We could almost write the script – the familiar mixture of bravado and bluster, combined with a pathological refusal to accept any personal responsibility.

Pachauri will get away with it, if only because there is actually no mechanism for dismissing him as yet. But, despite the overt expressions of support, he is a grievously wounded animal. And, would that he knew it, there is a ticking time-bomb which is set to do him still more damage.

Although my piece on Euros for Rajendra has gained no great traction over here, it was in fact intended for a different audience. Much of Pachauri's power base comes from developing countries, where he is perceived as their champion – but the suggestion that he has sold himself to the Europeans for a mess of euros is potentially very dangerous to him. The bomb has been planted.

UN Sec-Gen Ban Ki-moon is also trying to hold the line, although his pleas seem to have an air of desperation about them. That he is calling for the sceptic message to be rejected is simply to acknowledge its power.

That an extra meeting if the UNFCC is also now being scheduled, to be held in Bonn between 9-11 April can also be taken as a sign of desperation. This dire provincial city – one time capital of West Germany before reunification, is not the place for inspiration.

That apart, one only has to look at the explosion of news over on Climate Depot to see that the issue has finally come alive in the States. Some Americans have been observing that it is the British media which has been making the running – and indeed it has until recently – but now the US media are taking over.

But what is very different is that the issue there has acquired a political dimension. With the EPA endangerment hearing in the Senate, EPA administrator Lisa Jackson is being skewered, with her and Senator Boxer – chair of the powerful Environment and Public Works Committee – being forced to distance themselves from the IPCC.

Sen Inhofe's intervention has also been especially pointed, calling for criminal investigations of the scientists involved in "Climategate". His interview, this time is sure-footed, and his focus on Gore and his "science fiction" is nicely barbed. "We're winning and they're losing," he concludes.

Whatever the view of Inhofe, at least the Americans have a political champion, which is more than can be said this side of the Atlantic where, as the election approaches, all the main opposition players are keeping their heads down, a tactical error which has been noticed.

The same can be said for the main political blogs. Uncomfortable with real issues, they are slavishly following the personality politics agenda set by the MSM. As for carving their own niche, there is little to choose between them and their MSM political commentator counterparts.

Nonetheless, there is some good writing and astute comment, with Bishop Hill keeping the British flag flying, as probably the premier sceptic blog this side of the Atlantic. But some of the smaller blogs are also standard bearers, putting the "big hitter" (by UK standards) political blogs to shame.

There is Purple Scorpion, with a piece on more carbon nonsense, one of several posts on the issue, then there is Wittering from Witney, a dissenting voice from the home of Boy Dave, An Englishman's Castle and a fine piece by Autonomous Mind. From India, Liberty News Central is always worth a read.

Nothing though, can beat Ban Ki-Moon's latest comment – if only for its comedic value. The same global resolve, he tells us, is needed to fight organized crime as with terrorism. This is from the organisation that brought us the Iraqi "food for oil" scandal and which has one of the biggest organised crimes of the century under its own wing – the IPCC.

Inhofe is right. "We're winning and they're losing."