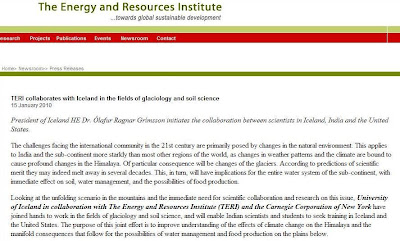 Despite Dr Pachauri's claims that his research institution TERI was being funded from a grant of $500,000 from the Carnegie Corporation of New York, the money from one of America's leading and oldest charities had already been suspended by the time he announced the grant.

The announcement of the funding was made jointly at a prestigious press conference by Pachauri and the president of Iceland, Dr Ólafur Grímsson on 15 January of this year.

On the day, the TERI press release claimed that, "according to predictions of scientific merit they [the glaciers] may indeed melt away in several decades. This, in turn, will have implications for the entire water system of the sub-continent, with immediate effect on soil, water management, and the possibilities of food production."

"Looking at the unfolding scenario in the mountains and the immediate need for scientific collaboration and research on this issue," the release continued, "[the] University of Iceland in collaboration with The Energy and Resources Institute (TERI) and the Carnegie Corporation of New York have joined hands to work in the fields of glaciology and soil science."

Although the release claimed that the collaboration, "will be funded primarily by the Carnegie Corporation of New York", the celebrations were a sham as, according to the Indian DNA news agency, no money had been given to either TERI or Grímsson's Global Centre.

This is confirmed by Susan King, vice president for public affairs at the corporation. "In September 2008, we approved a $500,000 grant to the Iceland -based Global Centre towards research on water-related security and humanitarian challenges to South Asia posed by the melting Himalayan glaciers. It was a one-time grant," she said.

"No funds have been paid to the centre as the grantee (the centre) told us not to send it because of political and economic challenges facing Iceland," she added.

No timescale is given by King, but from a separate e-mail sent to us from Carnegie official George Soule, we learn that the grant was suspended shortly after it had been approved, i.e., well before TERI's January launch. The Corporation has not answered queries about whether the grant will be reinstated.

The DNA agency notes that, "Clearly, the US charity's money hasn't been squandered on a Himalayan blunder." King declined to comment, or get dragged into the climate row, the agency says, but did the centre and Carnegie smell a rat? The grant never happened despite being approved in September 2008.

It's terribly odd for a receiver of a grant to turn down generous funding "unless, of course, the centre felt the United Nation's Intergovernmental Panel on Climate Change (IPCC) report that climate change was likely to melt most of the Himalayan glaciers by 2035 was far-fetched," the agency concludes.

However, there is more. On Sunday, we noted that an emergency workshop of glacier experts had been convened on 28 December by UNEP, the sponsoring organisation for the IPCC – specifically to discuss the melting glacier claim.

Then, the considered response was that the claim was unsupported by science and that the IPCC conclusion "may have to be revised". Yet Dr Pachauri, head of the IPCC – who must have known of the conclusion – did nothing until 20 January, three days after it had been raised by The Sunday Times and five days after his TERI press launch.

Had the controversy broken earlier, it would clearly have been embarrassing to Drs Pachauri and Grímsson but was there a more sinister motive? With the Carnegie funds having been suspended, was Pachauri keeping quiet in order to avoid the very controversy he feared might happen – knowing that a major press row might end any chances of reinstatement?

Do we have a cover-up here?