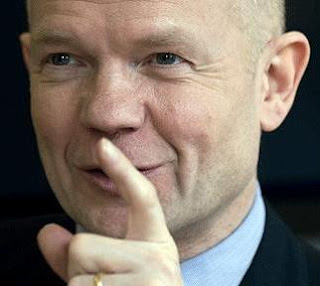 We have William Hague with "an apocalyptic message", telling us we must choose between "change and ruin".

The forthcoming general election is our chance - our only chance - to get rid of Gordon Brown. "This is no time to punish mainstream political parties with votes for fringe groups or to indulge in fantasies of a hung Parliament," says Hague.

Elsewhere, we have Geoffrey Lean, on global warming, telling us ... er ... we must choose between "change and ruin". Keep the faith or the kangaroo gets it.

Both are variations on a theme – the politics of fear. Do as I say or terrible thing will happen to you, and generations to come - always in the same hectoring, patronising tone.

It seems an unlikely coincidence that, in the global warming camp, we also have Professor Liss of the CRU and Prince Charles offering very similar doom-laden messages.

Now, in the political camp, the not-the-tory-party, bereft of ideas – and a fully paid-up member of the warmist ideology – adopts the same tactic. In both cases, though, they are doing nothing but display their own intellectual bankruptcy. Neither have anything to offer except a vision of "apocalypse future".

The answer to both camps is the same.