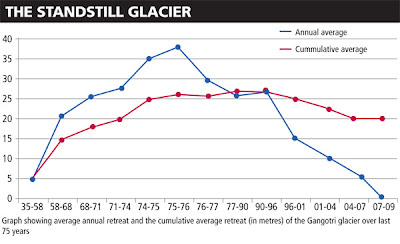 George F Will in The Washington Post argues that, "A religion is what the faith in catastrophic man-made global warming has become." Thus, he tells us, "It is now a tissue of assertions impervious to evidence, assertions that everything, including a historic blizzard, supposedly confirms and nothing, not even the absence of warming, can falsify."

He is not the first to make such an observation, but to find such expression the The Washington Post is a significant step on the road to deprogramming a population which has been held in the thrall of this false creed for far too long.

Another step is a profile of Vijay Kumar Raina in Forbes India. Raina, of course, is the scientist who produced the Indian government's glacier report, of which Pachauri was so rudely dismissive.

What shines out from this profile is a picture of a real scientist, one who has spent a lifetime steeped in his specialist subject and has forgotten more about glaciers than that the posturing golf course owner Pachauri knows or ever will know.

But what is so very helpful is that Raina was also a government scientist, working in areas about which academics would know little. And his knowledge sheds a massive light on the disputed claims about whether glaciers are growing or shrinking.

Because of the remoteness of the majority of Himalayan glaciers – and the inconvenient fact that many of them lie in war zones – many of the baseline surveys, on which the IPCC and others base their claims of shrinkage, were undertaken by aerial photography.

The problem here is that the photography was done in November when the skies had cleared of cloud after the monsoons but, by that time, snows had already fallen, obscuring the outlines of the glaciers. Thus, there was a tendency to over-estimate the size of the glaciers on the maps based on the photography.

Now, however, the surveys are carried out in September by satellite, before the snows and when glacier outlines are a lot clearer. As a result, comparisons tend to over-state the shrinkage.

That problem does not arise to the same extent where earlier satellite imagery exists – and, interestingly, when like-for-like imagery was examined for the Tibet region, a report published last year found that a significant number were either holding their own or increasing in mass.

This was a survey of the Karakoram mountains in the Western Himalayas where, of a group of some 230 glaciers, 87 had surged forward since the '60s, sliding down into lower elevations.

The researchers, imbued with the global warming ethos, clearly failed to remark that their findings depended on comparing like with like, and must have been unaware of the problems in other areas, described by Raina.

Even without the photography though, Raina has another trick up his sleeve. He produces a graph of the rate of retreat of the poster child Gangotri glaciers (pictured above), showing that the rate of retreat started to slow in the 90-96 period and has now stopped completely.

A full appreciation of the situation is nevertheless complicated by the fact that high-definition, multi-sensor satellite monitoring of remote glaciers is only relatively recent, so analysts are using relatively short-term datasets, which cannot really support meaningful conclusions when so little is known about natural variability and long-term behaviour.

Despite this, we still have Pachauri squeaking that the glaciers are continuing to melt rapidly, a claim that owes far more to his need to recover lost credibility over the "Glaciergate" affair than it does any science.

In fact, this reinforces Will's thesis. Pauchauri clings in desperation to his shrinking glaciers, not because of any underlying reality but because they are a central tenet of his faith. He must believe this because, without that certainty, the very foundation of his existence is challenged.

Increasingly though, this desperation of the believers, once threatening, now looks pathetic. Their climate change God, unlike the glaciers they so revere, is melting away