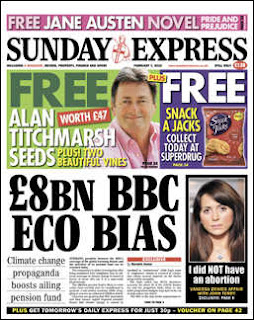 STRIKING parallels between the BBC's coverage of the global warming debate and the activities of its pension fund can be revealed today, says The Sunday Express on its front page.

The corporation is under investigation after being inundated with complaints that its editorial coverage of climate change is biased in favour of those who say it is a man-made phenomenon. The £8 billion pension fund is likely to come under close scrutiny over its commitment to promote a low-carbon economy while struggling to reverse an estimated £2 billion deficit.

Biased BBC follows through with a stonking piece. Picking up "Africagate", blog post author Robin Horbury notes that "the BBC is hard at work with your cash, hell bent on a political mission to persuade millions of Africans that a series of cobbled together lies are the truth. Its co-conspirators are the EU and the government."

Yet, laughably, the Independent on Sunday resurrects the tired old story about oil money funding "deniers". The authors of that piece are Jonathan Owen and Paul Bignell and I had a lengthy telephone conversation with Owen earlier this week when he called me to discuss "Amazongate".

The man had swallowed the line completely about a "powerful, well-funded conspiracy", and was absolutely convinced that I was part of it. All he got from me that was printable (missing out my suggestions as to where to put his head) was:

Dr Richard North, a climate change sceptic and blogger, rejected claims of a conspiracy as "laughable" and denied having any links to vested interests. "Anybody who knows me knows I'm a loner. Nobody tells me what to do or dictates my agenda."

What is interesting is what Owen doesn't print. Initially, his concern was to rebut the "Amazongate" story, but he does not seem to have followed through. I wonder why.