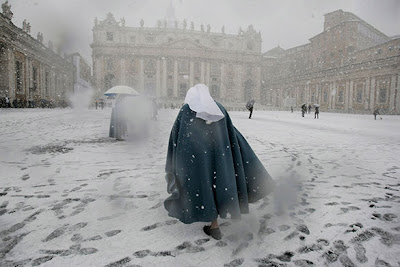 ... watch the nuns plod through the snow – the first significant snowfall since 1986.

Meanwhile, says US-based Christian Science Monitor, this has been one of the most bizarre winters of the new century, with storm after storm slamming the East Coast in particular. And now, a storm that dropped a foot of snow Thursday on Dallas – Dallas! – could help bring about the presence of snow in all 50 states.

That's if the storm delivers a few inches, as expected, in parts of north Florida. If that indeed happens, meteorologists at AccuWeather and the National Oceanic and Atmospheric Administration (NOAA) say they expect some coverage in all 50 states – the first time in history.

Here, it was a busy day, hence fairly light blogging. We'll have some interesting stories for you in the media on Sunday, shifting the balance and keeping up the pressure. Too tired to do a really serious post, but if you want an idea of quite how far removed from the concept of "transparency" the UN really is, read this.

No national agency would get away with this level of disdain for the media – but then none of the officials have to stand for general election. They can put two fingers up, and (for the time being) get away with it. Can you imagine how responsive a "world government" would be?

It makes you wonder when you see reports like this, with the UN calling for $750,000 to meet the growing disaster in Mongolia – a pitifully small amount compared with the colossal expenditure on global warming. Somewhere, we seem to have got our priorities mixed up.