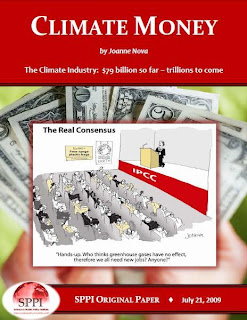 Something to which some attention was given at the time – but not enough – is Joanne Nova's report last July on "Climate Money".

It pointed out at the time that the US government had spent over $79 billion since 1989 on policies related to climate change, including science and technology research, administration, education campaigns, foreign aid, and tax breaks.

This is especially relevant in view of the attempted smear by the Independent on Sunday yesterday, resurrecting the tired story of Exxon Mobile funding the sceptics.

Over ten years, the company paid a grand total of $23 million to sceptics (by no means the larger part of which was devoted to climate change) less than a thousandth of what the US government has put in, and less than one five-thousandth of the value of carbon trading in just the single year of 2008.

Against that, over the last 20 years, by the end of fiscal year 2009, the US government had poured in $32 billion for climate research. In 1989, the first specific US climate-related agency was created with an annual budget of $134 million. Today in various forms the funding has leapt to over $7,000 million per annum, around 50 fold higher.

That, of course, is only the US picture – and government funding. To that, one must add the hundreds of millions, if not billions, poured in by the charitable foundations, and the massive funding from industry – much of which ends up in the pockets of advocacy groups such as the WWF.

Then, albeit on a smaller scale, we have other nations around the world adding to the funds. In the UK we have seen that the Met Office has been given £243 million of taxpayers' money on "climate research", and that represents just the tip of the iceberg.

Despite the billions, Joanne Nova observes that "audits" of the science are left to unpaid volunteers. A dedicated but largely uncoordinated grassroots movement of scientists has sprung up around the globe to test the integrity of the theory and compete with a well funded highly organized climate monopoly. They have exposed major errors.

All this puts into perspective the claims that the current attacks on the IPCC and Pachauri are an "an organised, systematic and vicious attack by powerful and well-funded lobbies in the developed world."

In fact, our greatest strength is precisely that we are a "largely uncoordinated grassroots movement". If we ever became organised and "coordinated" in the way that the climate lobby claims to be, we would lose much of our power. And there is some comfort in the knowledge that, despite the billions pumped into the climate propaganda machine, the warmists are losing the argument.

Thus, while you can assert that "money talks", conviction talks louder.